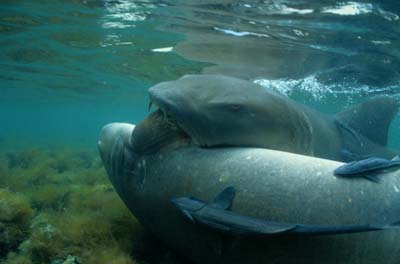 If you think explaining the "birds and the bees" to a curious child is difficult, just imagine trying to tell a shark about it. A shark can be born three different ways, including live birth, hatching from an egg, and an egg-and-live-birth combination. Plus, in some shark species, you have to survive gestation without being eaten by your developing siblings. Not that you could tattle to Mom once you're out of the womb -- after birth, shark pups are pretty much on their own.

We'll get to that in a minute, but first, let's look at how sharks get pregnant. As opposed to other fish, sharks use internal fertilization. Courtship between sharks often appears violent to humans. To get the female to stay in place, the male bites her fins or her back. The male positions the female shark so that he can align their reproductive organs, and then he inserts his clasper into her cloaca. The clasper, which in some species is spiny and barbed so that it stays in place, transfers sperm into the female.

At that point, the male shark, the ultimate deadbeat dad, exits the story, never to be seen again. In fact, the only time a shark pup may ever meet his or her father again is if the adult tries to eat the pup. The female is left to nourish the embryos growing inside. Find out how shark pregnancy works next.

Conversely, some sharks use many males to father one litter. DNA analysis of one litter of nurse shark pups found that at least four males had fathered some 32 pups [source: Saville et al.]. Other shark species may require multiple inseminations as well.