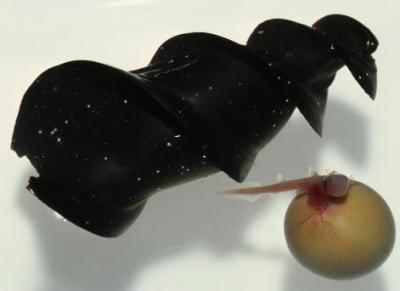 After the brief courtship and one-night stand with the male, the female shark is left to carry the fertilized eggs in her oviduct, or womb. Gestation periods for sharks vary, from about five to six months to two years [sources: Carrier, Oregon Coast Aquarium]. The spiny dogfish shark has the longest gestation period, not just of sharks, but of all vertebrates, at 24 months [source: Bester].

Here's a rundown on the three different ways sharks swim into the world:

Oviparity: Oviparous sharks lay eggs, which are protected by an egg case. These egg cases are sometimes called "mermaid's purses." About one-third of shark species are oviparous [source: Australian Marine Conservation Society]. The female shark deposits the egg cases in the sea so that they'll be safe from predators. This represents her last real act as a parent. Horn sharks, for example, deposit their egg cases in rock crevices, where they harden into twisted spirals that are difficult to remove (although snails and seals have been known to break the shell). Port Jackson sharks do the same thing, carrying the egg cases in their mouth until they find a safe spot. That's about the extent of an oviparous shark's parental commitment, though. The embryo is nourished by the yolk in the egg sac and chews itself out when it is fully developed.

Viviparity: Viviparous sharks carry the embryos through the entire gestation period and give birth to live shark pups, similar to how mammals give birth. Embryos are attached to their mother with a yolk sac placenta, which is how they receive their nutrition. In some species, females also secrete uterine milk, which provides more nutrients to the yolk sac. Viviparity is considered the most advanced method of reproduction and is practiced by bigger species, such as blue and hammerhead sharks. About one-third of sharks are viviparous [source: Australian Marine Conservation Society].

Ovoviviparity: Most sharks are ovoviviparous; they combine the first two methods. They produce eggs, but instead of hatching outside the body as in oviparity, the eggs are carried within the female for the gestation period. When the egg hatches, the shark pup continues developing inside the female until it's born. For the first part of the gestation period, the embryos receive nourishment from their yolk sac, and once hatched, the lining of the uterus likely provides uterine milk or some other nutritious fluid. Because there is never a direct connection between the embryo and the mother, ovoviviparity is also sometimes known as aplacental viviparity.

In some ovoviviparous species, embryos get additional nutrition from eating their brothers and sisters in the womb. Learn about this shark-eat-shark world on the next page.