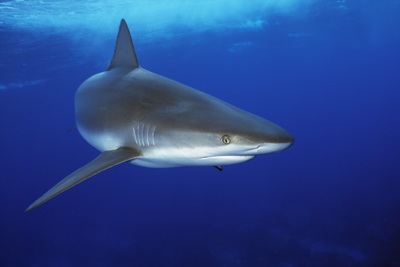 Is this reef shark swimming for its life?
Jeff Hunter/Photographer's Choice RF/Getty Images

Most bony fish have a special swim bladder that helps them move around in the water. When the fish takes in oxygen, it can release some of the gas into the bladder. This increases the fish's buoyancy, so it rises through the water. To sink down to the bottom, the fish squeezes some of the gas out of the bladder, decreasing its buoyancy. In this way, a fish is something like a blimp or hot air balloon that uses the upward lift of atmospheric buoyancy to change altitude.

Sharks have two sets of paired fins on the sides of their body, in the same general position as the main wings and horizontal tail wings of a plane. The shark can position these fins at different angles, changing the path of the water moving around them. When the shark tilts a fin up, the water flows so there is greater pressure below the fin than above it. This creates upward lift. When the shark tilts the fin down, there is greater pressure above the fin than below it. This pushes the shark downward.

This fin arrangement gives sharks amazing maneuverability. They can cruise at high speeds, stop suddenly and make sharp turns in every direction. This is one of the reasons they are such effective hunters. They move more quickly and with greater control than any of their prey -- most of the time, a shark's prey doesn't even know what hit it.

Of course, before a shark can swoop in for the kill, it has to locate­ its prey. In the next couple sections, we'll examine the finely tuned senses that help sharks locate and track their food.

Most fish depend on the law of averages for reproduction. They produce a huge number of offspring, but only a small percentage will survive. Sharks, on the other hand, mate only occasionally and give birth to a small number of shark pups at a time. Female sharks are extremely particular about choosing a mate, and males may have to contend with tough competition. This helps ensure that the babies will be healthy.

The birthing process varies from species to species. Some sharks lay eggs in protected areas on the ocean floor. When the shark pup is fully developed, it breaks through the tough egg casing and heads out on its own. In most shark species, the pups develop inside the womb and are fully formed at birth. These shark pups typically look like adult sharks, except, of course, much smaller.