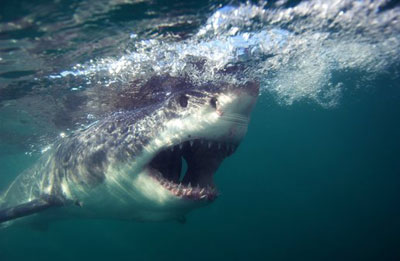 A shark's only real weapon is its mouth. Like its fins and sense organs, the shark's mouth is a highly effective physiological adaptation, perfectly suited to its job. There are two elements that make the mouth so effective: the teeth and the jaws.

Shark teeth are something like the teeth of land predators. They have very sharp points that will cut into meat. Sharks are exclusively carnivores, so for the most part they don't need any grinders for chewing plant matter. Some bottom dwelling sharks do have special grinding teeth for cracking shells open, but more active sharks have teeth suited only for eating flesh. There are a wide variety of shark teeth, just as there are a wide variety of sharks. These teeth can be divided into two general categories.

Many shark species, such as the goblin shark and sand tiger, have very long, thin teeth. This structure is well suited for catching small fish. The shark kills the fish immediately, by piercing it with a single bite. Then it swallows the fish whole.

Sharks that go after larger prey need a different strategy and a different sort of tooth. They tear into their prey several times, biting off large pieces of flesh. Sharks in this group, which includes the infamous great white shark, have wide serrated teeth. These teeth act something like a hunting knife -- they cut easily through tough flesh and bone. Many sharks have combinations of long pointed teeth and wider serrated teeth, so they can hold their prey in place while they cut into it.

Shark teeth have the same basic consistency as our teeth, but they don't sit in the mouth in the same way. Our teeth rest in sockets, and aren't replaced after childhood. Shark teeth are attached to the jaw by soft tissue, and they fall out all the time. This is crucial to the shark's effectiveness -- worn or broken teeth are continually replaced by new, sharper teeth. In some sharks, such as the great white, these teeth are arranged in several rows.

Click the button to see how a shark bites its prey.

Sharks have a very unique jaw structure, which makes their mouths especially effective weapons. In most animals, the lower jaw moves freely but the upper jaw is firmly attached to the skull. In sharks, the upper jaw rests below the skull, but can be detached when the shark attacks its prey. This lets the shark thrust its entire mouth forward to grab onto its prey. Jaw mobility varies among different species, but all modern sharks have this ability to some degree.

In the next section, we'll find out what science knows about the life of a shark.

Sharks terrify people because some of them can, and sometimes will, feed on human beings. Sharks do attack humans from time to time, but the risk of attack is actually very slight. Only a small proportion of shark species have been known to attack, and even these species exhibit this behavior very rarely.

These sharks typically attack defensively, when a person has wandered into their environment, or accidentally, because they've mistaken a person for their standard prey. In both cases, chances are the shark will flee after only one bite. They don't have any real interest in humans as a food source.

Between 75 and 100 shark attacks are reported every year, and fewer than 20 are fatal. Statistically, this is an extremely low number.