by Katie Lambert
Prev NEXT
3 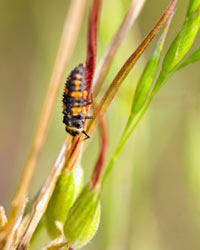 Not what you think of when you hear the word "ladybug"
© iStockphoto.com/mguntow

Ladybug larvae look absolutely nothing like the sweet, spotted adults they'll become. They look kind of like tiny black alligators with spines and spots, which in a beetle isn't generally a comparison that inspires "Aww, how cute" comments. In fact, it's not uncommon for an inexperienced gardener to see one and think some vicious invader is on a quest for plants to destroy.

Ladybugs usually stay larvae for three or four weeks, enough time to do some serious chowing down. But that's not the only cuisine concern in the mind of a larva -- cannibalism is a very real threat for growing ladybug babies. Luckily, larvae can move around. In order to avoid being gobbled up, many of them move away from the prey other ladybugs feed on.

During the larval stage, the ladybugs molt four times. The stages of development between these moltings are known as instars.

And then they enter the next stage: that of the pupa.