Are cheetahs clones of each other? 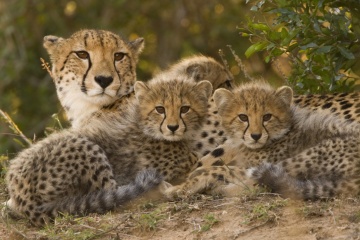 Unlike many other animals, cheetahs often look strikingly similar, especially in terms of their markings. But that doesn't mean their clones right?
hilton kotze/Thinkstock

Thanks to an ice age that began 10,000 to 12,000 years ago, 75 percent of all mammals in North America, Europe and Australia suddenly went extinct [source: Menotti-Raymond and O'Brien]. This mass extinction that exterminated the saber-toothed tiger very nearly killed off all the cheetahs, but a few managed to survive and carry on the present-day species. Scientists call this near-extinction a population bottleneck. In the case of the cheetah, it reduced the gene pool so much that modern-day cheetahs have about the same amount of genetic variation as lab mice or livestock that have been deliberately inbred.

Cheetahs are virtual clones, with only one to 10 percent of the genetic variability found in other feline species [source: Begley]. In a landmark 1983 study, scientists tested enzymes in cheetah blood to spot genetic similarities. For most cat species, these enzymes differ between 20 and 50 percent from individual to individual. When testing enzymes in cheetahs, researchers found no variation at all among 55 different cheetahs [source: O'Brien et al].

This lack of genetic diversity could have serious consequences for these speedy cats, including sperm abnormalities, difficulty in reproduction and high infant mortality. While less than a third of the sperm in domestic cats is considered abnormal, more than 70 percent of cheetah sperm suffer from abnormalities [source: Begley]. This means it's very difficult for the animals to produce healthy young. Until the 1970s, only one cheetah birth was ever recorded in captivity and all three cubs died within months of their arrival in 1956 [source: Gugliotta].

A 2008 report by Smithsonian revealed that only about 225 cheetahs remained in captivity in the United States and Canada and the death rate exceeded the birth rate for the majority of the decade leading up to the report [source: Gugliotta].

Of course, the plight of the cheetah doesn't end once he successfully mates. These animals have extremely high infant mortality rates. More than 20 percent of infants born in captivity die within six months, compared to as many as 70 percent of those born in the wild [source: Smithsonian National Zoological Park].

Even those cheetahs that make it to adulthood are highly vulnerable to disease. One study found that cheetahs easily accept skin grafts from other cheetahs, indicating that their immune systems are virtually identical. This lack of genetic diversity means that a single illness can spread rapidly through the cheetah community, leaving few healthy animals remaining to continue the species.