Battle of the Best Sonar: 'Team Dolphin' vs. 'Team Bat'

by Mark Mancini Dec 6, 2018
Are you team bat or team dolphin? The scientists have weighed in and the score is super close. Ewen Charlton/PhotographerOlympus/Getty Images/HowStuffWorks

Without burdock burrs, squid nerves and kingfisher beaks — respectively — we wouldn't have Velcro, Schmitt Trigger input circuits or the high-speed Shinkansen bullet train. Engineers love to mine the natural world for ideas.

Echolocation is another example where nature beat mankind to the punch. Echolocation is the process of detecting or examining an object by hitting it with high-frequency sound waves, which then bounce back to the source. Sonar technology has enabled humans to do this for more than 100 years, but numerous toothed whales — a lineage that includes dolphins, porpoises, and sperm whales — utilize echolocation. So do around 1,000 bat species.

As sonar engineering continues to evolve, future inventors will probably derive lots of inspiration from bats and toothy cetaceans alike. But which group will be more valuable to the pioneers of tomorrow?

That question has led to some playful ribbing among scientists. Laura Kloepper is an assistant professor of biology at St. Mary's College in Indiana. At a November 2018, gathering of the Acoustical Society of America, she presented new research that highlights some key differences between bat and dolphin echolocation. And to Kloepper, the choice is clear: She thinks bats use the technique in a way that's far more impressive.

But others aren't so sure. There might not be a definitive winner in this aural battle royal. Before you declare yourself for "Team Bat" or "Team Dolphin," here's a breakdown of the matchup.

Sound travels roughly four times faster in water than it does in the air. That allows toothed whales to echolocate across much greater distances. Using its sonar, a submerged bottlenose dolphin can identify a potential meal from 361 feet (110 meters) away.

Bats have much narrower sonar ranges: Most insect-hunting species can only detect prey items that are within 9.8 to 16.4 feet (3 to 5 meters) of them. No contest there.

Volume is another area where toothed whales blow away the competition. Dolphins and their kin echolocate by using their nasal passages to make a series of clicks that move through the "melon," a fatty organ located above the jaws. Like a built-in megaphone, the melon focuses and directs the outgoing sound. In some of these whales, the strings of clicks are as loud as 230 decibels.

That's almost 130 decibels higher than any roaring trains you'll hear at a New York City subway station. It also puts bat-made noises to shame: The sonar-wielding flyers emit sounds in the ballpark of 100 to 110 decibels.

In bats, it's usually the tongue or the larynx that generates the sound waves that make echolocation possible. Scientists recently learned of another, more primitive technique. A 2014 study reported that Old World fruit bats navigate the darkness by producing clicks with their wings and listening for the echo. Researchers haven't figured out how that works yet.

Now making these noises is only half the battle. If you're going to use sonar, you've got to process returning echoes when they arrive. Dolphins do this with their jaws and teeth, which intercept echoes and pass them along to the middle ears. And of course, bats use their overgrown external ears to collect return signals.

Even with those big old ears, it's a wonder that bats can hear as well as they do. Lots of species live, travel and hunt in massive colonies; the biggest are around 15 million animals strong. When hundreds, thousands or millions of these animals all start echolocating at once, the end result is a ton of background noise.

So a given bat needs to be able to distinguish between its own cries and those of other bats. To that end, the winged mammals can alter the pitch, frequency and timing of their individual voices. Another option is to fight dirty: The Mexican free-tailed bat deliberately releases sounds that jam other bats' sonar signals. All's fair in love, war and bug-hunting.

Bat signals are intricate, flexible and easy to manipulate. On the other hand, the sonar clicks used by toothed whales tend to be a lot more homogeneous. The cetaceans have much less control over the pitch or duration of the relatively simple sounds they use to echolocate.

That's one reason why Kloepper thinks bats are more sophisticated sonar-users. Anti-jamming strategies could be another mark in the flying mammals' favor. In a recent experiment, Kloepper and her colleagues exposed two dolphins to recordings of artificial cetacean clicks. Instead of getting disoriented, the aquatic beasts slightly altered the timing and frequencies of their outgoing sonar signals. The performance wasn't too shabby, but Kloepper stresses that bats still have greater vocal flexibility.

On Nov. 16, 2018, Kloepper defended Team Bat in a friendly Science Friday debate with Brian Branstetter, a biologist with the National Marine Mammal Foundation. Halfway through, her opponent noted that dolphins have an audio superpower that the flying critters lack.

Bat return signals are packed with information about the external appearances of solid objects. But due to the nature of water, when a toothed whale echolocates, its signals pass through targets. That tells the animal what the object looks like on the inside and the outside. A 1992 experiment found that bottlenose dolphins could determine the thickness of hollow cylinders using only their echolocation talents.

In spite of all the things that separate them, dolphins and bats might not be so different after all. A 2010 genetic analysis found that the two lineages independently developed sonar after going through the same general set of hearing-related mutations as they evolved. History repeats itself; you might even say it echoes.

NOW THAT'S INTERESTING
Bats and toothed whales aren't the only animals that rely on sonar. Cave-dwelling oilbirds use echolocation to navigate in the dark and it's theorized shrews use the same trick to get a sense of their surroundings.

You Can Never, Ever, Ever Stop Making Sourdough Bread

Why Restaurants Are So Loud These Days 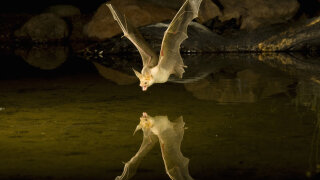 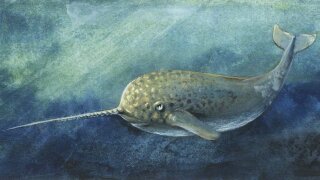 Narwhal Echolocation Abilities Exceed Those of Any Other Animal, Study Finds 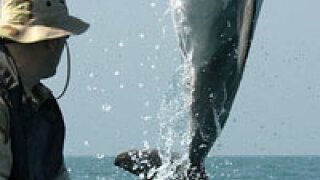