Browse the article What happens to chimps used in medical research? 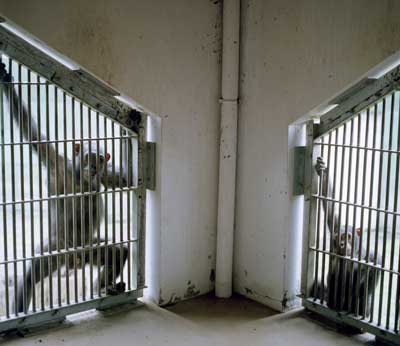 The use of chimpanzees in captive research has raised controversy because of their humanlike traits and genetic similarity. See more monkey pictures.
Lynn Johnson/National Geographic/Getty Images

If a chimpanzee could pick anywhere in the world to live, Spain would be a wise choice these days. Not only is it a quick trip to their native Africa, but the country's parliament voted in June 2008 to support the tenets of the Great Ape Project. The nonprofit organization lobbies on behalf of great apes (chimps, gorillas, bonobos and orangutans) for their right to life, protection of individual liberty and prohibition of torture. Once the Spanish government's decision becomes law, apes cannot be held captive in circuses, for instance, or for medical testing [source: O'Carroll].

Concern regarding the ethical treatment of animals in scientific experimentation stretches back way before PETA got its start in 1980. In 1789, philosopher Jeremy Bentham questioned whether animals possess the capacity for suffering, and Great Britain later passed its first anti-cruelty law in 1822 [source: Anderson et al]. Not long after, the American Society for the Prevention of Cruelty to Animals was started across the pond in 1866.

Amid the multitude of moral questions raised about dissecting and injecting animals in the name of scientific advancement, those concerning chimpanzees have sparked particular controversy. In the animal kingdom, you can't get closer to humans than chimpanzees since we share around 99 percent of the same DNA. For proponents of animal testing, that genetic proximity makes chimps prime "human models" to help find cures for the viruses and diseases that plague us. On the other hand, because they exhibit remarkably human traits, opponents believe testing and captive research represent forms of cruel punishment.

But in the 1940s, the research at Yerkes Primate Research Center changed from behavioral to biomedical studies, ushering in the period of chimpanzee medical testing. 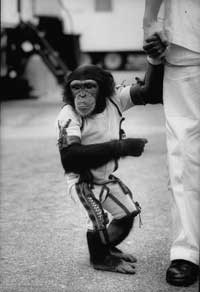 Ham, the astrochimp, after his space flight in 1961.
Tim Morse/Time & Life Pictures/Getty Images

Scientists selected chimpanzees as test subjects for infectious diseases with the goal of finding cures or vaccines. For instance, the National Institutes of Health attributes ape testing to the discovery of the polio vaccine [source: Strandberg].

A decade later, when the space race between the United States and Russia blasted off, the Air Force (pre-NASA) obtained 65 chimps from the wild to research the effects of space on the body. These physical tests were similar to those that human astronauts go through, such as G-force simulation [source: Conlee]. One test chimp named Ham preceded Alan Shepard's historic flight into space. Although Ham made an adorable photo-op in his miniature space suit, it would be the spread of the human immunodeficiency virus (HIV) that would increase the number of chimpanzees as test subjects in the United States.

Chimpanzees, an endangered species, are native to Africa. Unlike mice or dogs, researchers didn't have ready access to chimpanzees for research. Instead, agencies and private companies had to import chimpanzees from the wild like the Air Force did with its space program testing. However, once the United States and other countries agreed to the Convention on International Trade in Endangered Species (CITES) in 1975, wild chimpanzee imports were restricted.

For those chimpanzees already brought into the United States for research, what type of treatment were they receiving? Congress passed the Animal Welfare Act in 1966 that outlined the minimum care requirements for warm-blooded animals in captivity, including nonhuman primates. It didn't exactly demand five-star hotel amenities. However, temperatures were to stay between 45 and 85 degrees Fahrenheit (7 to 29 degrees Celsius); animals were to be given adequate food and water; and researchers were to isolate sick individuals from the group, although veterinarians managing the facilities could authorize exceptions [source: USDA]. This law applied to chimpanzees used for biomedical research as well as behavioral research programs, such as those investigating chimps' language capacity.

In 1986, the National Institutes of Health started the Chimpanzee Biomedical Research Programs to study HIV and AIDS. To acquire enough chimps to perform these studies without violating CITES, the federal government oversaw a captive breeding project with some chimps already in the United States. Hundreds of these primates received HIV injections in order to analyze how the virus develops into AIDS. As the only animal that can contract HIV, chimpanzees seemed like a logical choice for treatment experiments. However, this series of testing also revealed that these apes rarely develop AIDS like humans do.

Although chimp research had yielded positive results for hepatitis B treatments, the AIDS research program was largely fruitless. The federal government had hundreds of HIV-infected chimpanzees on their hands, each costing around $15 per day to house [source: Berreby]. The chimpanzee's lifespan, which lasts up to 60 years, further complicated that caregiver responsibility.

While this research was happening, public opposition to animal testing had been steadily rising. Jane Goodall's primate studies in Tanzania revolutionized the perception of chimpanzees. She famously publicized the ability of chimpanzees to craft and use tools, communicate and create cultural patterns, all which previously were considered traits exclusive to humans. Animal rights groups such as the Animal Liberation Front, American Humane Association, American Society for the Prevention of Cruelty to Animals and PETA galvanized the debate about the ethics of animal testing. Even the now defunct Coulston Foundation, which housed the largest number of chimpanzees in the United States until its 2002 closing, attracted intense criticism because of its repeated citations from the USDA for negligent care [source: Stolberg].

By the beginning of the new millennium, the scene was set to phase out the use of chimpanzees in medical research within the United States and abroad. 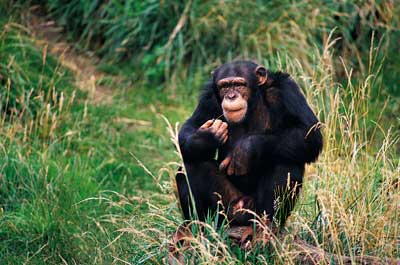 Under the U.S. ChiMP Act, those chimpanzees retired from biomedical research would be cared for at chimpanzee sanctuaries with habitats more akin to their native homes.
Gerry Ellis/Getty Images

In 2000, there were around 1,600 chimpanzees in the United States being used for biomedical testing. Of those, the National Institutes of Health estimated that around 500 had been injected with a communicable virus or disease [source: Strandberg]. Many of the research chimpanzees were owned by the government, with the rest belonging to private pharmaceutical companies. But with the federal chimpanzee captive breeding program still in existence and diminishing demand for chimpanzee test subjects, the government recognized it had a surplus of the apes. The government needed to find a solution for the aging chimps infected with viruses and the healthy ones born into captivity. As a result, Congress passed the Chimpanzee Health Improvement, Maintenance and Protection Act (ChiMP) in 2000. Eventually, the government cut off funding for the captive breeding program in 2007.

The ChiMP Act mandated that chimpanzees involved in federal medical research would receive lifetime care, rather than being euthanized. To make that happen, the government established a chimpanzee sanctuary system, formerly headed by the Coulston Foundation, where the chimps could live the rest of their lives outside of cages. Save the Chimps in Fort Pierce, Fla., replaced the Coulston Foundation and has become the national chimpanzee sanctuary, home to at least 135 retired chimps. Additional sanctuaries, such as Chimp Haven and the Fauna Foundation, help comprise the national sanctuary system.

However, some federal and private U.S. facilities continue to perform research on chimpanzees. The ChiMP Act specifically applies to retired research or privately owned chimps. In early 2008, the American Humane Association reported that 1,200 chimpanzees are being held in nine federally funded centers for research [source: Conlee].

The New Iberia Research Center at the University of Louisiana at Lafayette houses the largest chimpanzee population with approximately 370 under its management. Each of the nine facilities is required by federal law to form an Institutional Animal Care and Use Committee to serve as the watchdog over animal testing procedures. For an idea of the types of projects that involve chimpanzees, the Yerkes National Primate Research Center covers areas like AIDS vaccines, drug addiction, Parkinson's disease and social behavior. Biomedical research performed on chimpanzees and other animals also have led to advancements in cardiovascular diseases and vaccine development [source: Strandberg].

Today, the United States and Gabon are the world's only two countries that legally allow biomedical testing on chimpanzees [source: Conlee]. In 1997, Great Britain quit granting licenses for the use of any of the four great apes as research test subjects. Other countries have since followed suit, including the Netherlands (2002), Sweden (2003), Austria (2006) and Japan (2006) [source: Humane Society].

While the United States still allows chimpanzee testing, the frequency of such studies has declined. In February 2008, the National Institutes of Health announced a five-year plan to accelerate the development of alternative testing methods to replace animal testing. If that proposal comes to fruition, most chemical and toxicology studies in the United States will take place in the cell cultures within test tubes, not inside humans or animals.