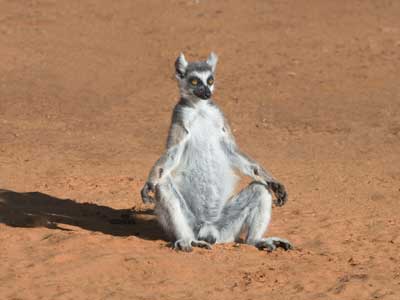 A ringtailed lemur suns itself in the desert sand. The lemur is known for this signature sitting position.  See more ­African animal pictures.
Keren Su/Getty Images

­The island of Madagascar, a country located about 250 miles (402 kilometers) off the coast of southeast Africa, is one of the ­most geograph­ically diverse places on the planet. Its terrain varies from beautiful coastal beaches and stretches of serene grassland to raging rivers winding through mountainous regions and dry expanses ­of desert. The island has a tropical climate with a rainy season lasting from December to April and a dry season lasting from May to November. Many distinct animal and plant species call this tropical paradise home. In fact, Madagascar is also home to some of the most unique and endangered plants and animals in the world. The lemur is one of these creatures.

Lemurs are primates, a group that includes monkeys, apes and humans. They're nocturnal, insectivorous creatures (meaning they feed on insects) with small bodies, long noses and large eyes. Eighty-eight species of lemurs exist today, all of which are native to Madagascar [source: Smithsonian National Zoo]. In fact, the reason lemurs have been able to thrive in Madagascar is because no other primates inhabit the island. But how exactly are lemurs different from other primates?

Basically, primates can be broken down into two suborders: anthropoids and prosimians. Monkeys, apes and humans are anthropoids; lemurs are prosimians. Like other primates, prosimians rely on their moist noses and strong senses of smell to find food and identify individuals in their social group. They also groom themselves and others in their group. But while anthropoids use their fingers to groom, lemurs use their teeth as a comb. Anthropoids are omniv­ores — they usually don't actively hunt and rely mostly on vegetation and insects as food sources. Prosimians like lemurs are insectivorous and herbivorous creatures. Also, prosimian society is female-dominated. In this girl-power-driven suborder, females get the best food, defend the group and choose their own mates.

Prosimians evolved before anthropoids. The first prosimian fossil dates back 55 million years ago. The first monkey fossil dates back 45 million years ago, and the first ape, 35 million years ago. Before the anthropoids entered the scene, prosimians were pretty prevalent; fossils have been found all around the world, including in Europe, North America, Asia and Africa. But when the larger, more dominant, adaptive and intelligent anthropoids came into the picture, prosimians like lemurs were out-hunted. In the race against other primates for food, they lost. And, they began to die out all over the world. They disappeared from almost everywhere — everywhere except Madagascar. 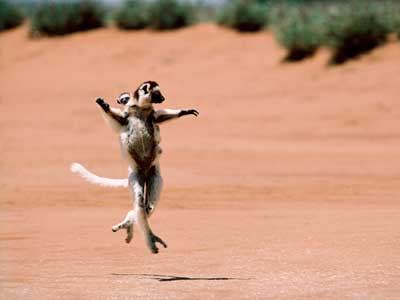 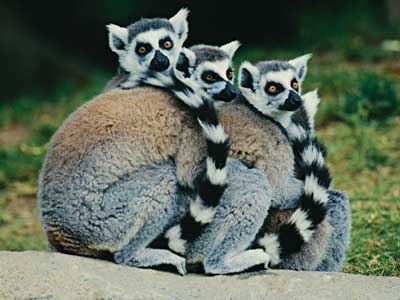 Lions: 5 Roaring Facts About the King of the Beasts
5 Cool Cats in the Wild
Horses Can Be Taught to Communicate With Us Using Symbols