Browse the article Is there a difference between monkeys and apes? 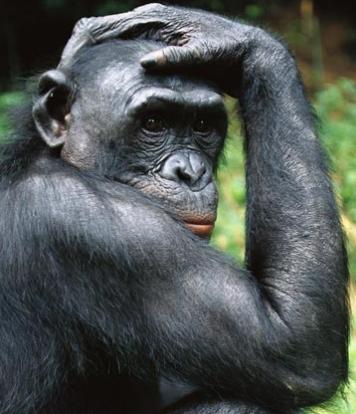 ­While apes and monkeys are both primates, and are part of the same primate suborder, there are lots of differences between them. There are also lots of other sorts of primates. The distinction between different primate groups is­ based on physical characteristics and evolutionary ancestry.

The order of primates is characterized by animals with forward-facing eyes and highly flexible arms, legs and fingers. This body structure evolved as an adaptation for life in the trees: Primates have flexible limbs and grasping hands so they can move from branch to branch. The forward-facing eyes are also an adaptation for life in this environment: They give primates excellent depth perception, allowing them to accurately judge the distance between trees.

The 235 modern primate species are divided up into two suborders -- the prosimians and the anthropoids. The prosimians, made up of lemurs and similar animals, are the more primitive group. They exhibit lower intelligence and they more closely resemble other mammal groups (they typically have whiskers and extended snouts, for example). The prosimians split off from the evolutionary line leading to humans relatively early. Anthropoids, commonly called the "higher primates," comprise the rest of the species in the primate order. Anthropoids vary considerably in size, geographical range and behavior, but they all have flat faces, small ears and relatively large, complex brains.

­W­ithin the suborder of anthropoids, primates are grouped into monkeys, apes and hominids. The easiest way to distinguish monkeys from the other anthropoids is to look for a tail. Most monkey species have tails, but no apes or hominids do. Monkeys are much more like other mammals than apes and humans are. For example, most monkeys cannot swing from branch to branch, as apes and humans can, because their shoulder bones have a different structure. Instead, monkeys run along the tops of branches. Their skeletal structure is similar to a cat, dog or other four-footed animal, and they move in the same sort of way. On the evolutionary line leading to humans, monkeys split off long before apes did. 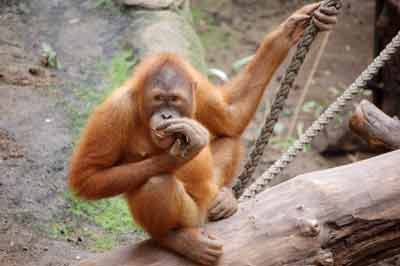 The apes, which include gorillas, chimpanzees, orangutans and gibbons, are much more like human beings than monkeys or lower primates are. They have the same basic body structure, possess a high level of intelligence and may exhibit similar behavior. Chimpanzees, humans' closest living relatives, use simple tools extensively and even have culture to some degree. Different chimpanzee social groups develop their own unique tendencies and behaviors, which may be in stark contrast to the behaviors of another group. Gorillas, chimpanzees and orangutans exhibit extensive language capability as well, though they do not have the necessary physiological adaptations to produce speech. Scientists have taught apes of all three species to use sign language, as well as special computer keyboards. Apes have even invented their own words in these languages, demonstrating higher cognitive ability.

Hominids are distinguished from apes mainly by mode of locomotion. While apes predominantly use all four limbs to move along the ground, hominids have developed upright bipedal walking -- that is, they walk erect, using only their hind limbs. Switching from quadrupedal walking to bipedal walking was a crucial development in man's evolution because it freed up our ancestors' hands. This allowed them to carry and use tools while walking, which played a significant role in the development of civilization. Humans and extinct hominids are also characterized by large brains and advanced reasoning capabilities.

To make a long story short, "ape" and "monkey" are not synonymous. Apes, such as gorillas and chimpanzees, have evolved along parallel lines with human beings, and are quite close to us in a number of respects (chimpanzees and humans share 98 percent of their genetic material). On the evolutionary tree, apes are no more monkeys than we are.