The Stinking Truth of Skunk Spray and Tomato Juice 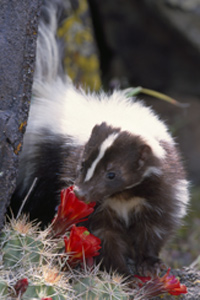 Some of the suggestions you'll find when searching for ways to rid yourself of the odiferous skunk spray aren't terribly appealing. Then again, if you've ever gotten a whiff of a skunk's primary weapon (reminiscent of rotten eggs to the nth degree), you may consider any home remedy thrown your way.

Many of the common recommendations, like bathing in a tub full of tomato juice, do little more than mask the unpleasant smell. The most effective antidotes are those that neutralize the spray's main ingredients by changing them into different, nonsmelly compounds.

The exact composition of skunk spray depends on the species, but the main offender common to all skunks is a group of organic compounds called thiols. These compounds are characterized by their attached sulfur and hydrogen atom and are notorious for a strong smell. Two highly volatile thiols, (E)-2 butene-1-thiol and 3-methyl-1-butanethiol, are the main components responsible for the characteristic odor of skunk spray [source: Wood].

The reason that people think skunk spray and tomato juice cancel each other out is due to something known as olfactory fatigue, which is just another way of saying that your nose gets accustomed to a scent after a period of time. When your nose stops detecting the skunk spray, the strong smell of tomato juice tricks you into thinking it must have taken care of the problem. However, if another person were to enter the room, he or she wouldn't be so easily fooled.

The only real way to get rid of the odor is to neutralize the thiols by changing them into compounds that your nose won't recognize as being offensive. The way to do this is by adding oxygen in a process known as oxidation. When oxygen is added to the sulfur/hydrogen compound, odorless sulfonic acid is formed [source: Wood].

This may sound like a complicated process that only Bill Nye could successfully pull off, but it's actually relatively simple. Many oxidizing agents, like hydrogen peroxide and baking soda, are readily available and safe enough to be used on people and pets. For things like clothing and furniture, regular bleach will get the job done.

So if curious Fido happens to frighten Pepe Le Pew, all you need to do is mix 1 quart (.95 liters) of 3 percent hydrogen peroxide, a quarter cup (59 milliliters) of baking soda and one teaspoon (5 milliliters) of liquid detergent and lather him up [source: ­Dean]. After five minutes, rinse off your pup and he should be as good as new. Be warned: This potion may do a little more than take away the smell as it can also slightly change hair color. Also, you can't store it in a closed container for the next time Pepe comes around because the mixture releases oxygen, which could break the container [source: Wood].

There are also a variety of commercial products available to eliminate skunk odors, but not all of them are safe for living things, so be sure to do your homework. Remember, it's better to be smelly than sorry.

Many pet victims of skunk spray experience a return of the smell whenever the weather gets damp. This is probably due to compounds that, while inoffensive on initial contact because of their low volatility and mild smell, are easily converted into a stronger, smellier form with the addition of water. So as long as any of these compounds are trapped in your pet's fur, every time they encounter water your nostrils might experience déjà vu.