Browse the article Are Tasmanian Devils Fighting Their Way to Extinction? 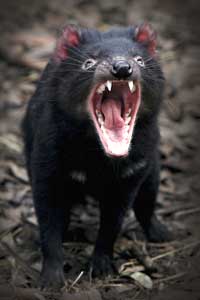 In relationship to body size, a Tasmanian devil's jaws are more powerful than a tiger's.
Ian Waldie/Getty Images

­About 500 years ago, Tasmanian devils became extinct on the Australian continent and took up residence 125 miles (201 kilometers) away. Inhabiting only the island of Tasmania -- and a few zoos -- they live in relative isolation, feasting on the dead flesh of kangaroos, wallabies, possums and even fellow devils. Although they're the world's largest carnivorous marsupials, adult males measure barely a foot tall (30 centimeters) and weigh up to 26 pounds (12 kilograms). In relationship to their small body size, Tasmanian devils' jaws are more powerful than tigers', able to chew through entire bodies, including bone [­source: Owen and Pemberton].

But it wasn't those champion chops that earned Tasmanian devils their villainous name. The story goes that European settlers who came to Tasmania in the 19th century were terrified by the nocturnal mars­upial's piercing screams and thus christened them as devils. Indeed, Tasmanian devils are chatty creatures, with 11 distinct forms of vocalizations used to locate each other, defend themselves and communicate that they're peeved [source: Owen and Pemberton].

­Tasmanian devils are known for their belligerent nature. When irritated, their ears turn purple, and they release a loud shriek as a warning sign to back off. Their devil-eat-dev­il lifestyle begins at birth. Female Tasmanian devils produce litters of about 50 tiny babies. But there are just four nipples inside of her pouch, which means that only the strongest survive. After weaning the babies for a few months, the young devils must set out on their own, or risk being devoured by their mother. From there, they lead mostly solitary lives, except during mating season. And when adults encounter each other, it isn't a heartwarming reunion. Tasmanian devils fight each other readily, inflicting wounds -- and sometimes death.

That innate urge to brawl has become an increasing threat to the livelihood of the species in the past decade. The frequency of Tasmanian devil fighting hasn't risen, but the outcomes have turned far deadlier. Instead of a couple of nicks and scratches, a skirmish between two devils could leave behind a festering cancer that threatens to wipe out the Tasmanian devil population in 20 years.

What Is Devil Facial Tumor Disease?

DFTD, a contagious cancer introduced by feral cats, foxes and other pests, has raced across Tasmania at a swift pace, reaching more than 60 percent of the island state [source: Clausen]. In May 2008, the government officially declared the Tasmanian devil species endangered, with only 20,000 to 50,000 individuals remaining from the original 150,000. The typical lifecycle of DFTD begins with a showdown between two Tasmanian devils. If one of the animals is already infected with DFTD, a bite will deliver the virus into the other devil's healthy flesh. After that, the Tasmanian devil will develop the symptomatic facial tumors. As the tumors metastasize, they may destroy the devil's jaw and cause their teeth to deteriorate. Eventually, the animals lose their ability to eat and starve to death. This process takes place over a period of three months to a year.

­Scientists have found only a handful of cancers that are contagious like DFTD. Viruses can trigger cancer, but rarely does cancer itself act as a virus, jumping among individuals. That makes not only DFTD easy to catch, but also highly fatal due to the genetic isolation among Tasmanian devils. The marsupials live in the wild only in Tasmania, which has resulted in a lack of genetic diversity among the species. In addition, the genetic sequencing of DFTD is so similar to that of a Tasmanian devil that the animal's body doesn't recognize the virus as a threat. Consequently, the animal's immune system doesn't respond to fight off the virus before it develops into full-blown cancer.

And the genetic clock ticks quickly in Tasmania. According to the Tasmanian devil preservation program, DFTD already has mutated and formed new strains. Chances are, the immune systems of Tasmanian devils won't adapt as fast to resist the emerging DFTD variations. Nevertheless, some of the animals have responded in an interesting way to the viral assassin. In communities with high disease rates, researchers recognized a pattern of earlier pregnancies. Most female Tasmanian devils breed between ages two and four; but in sickly groups, as many as 80 percent of females breed at 1 year old [source: New Scientist].

But that activity won't stamp out DFTD, which could wipe out Tasmanian devils in 20 years. Instead, the Tasmanian government and a team of scientists have stepped in to save the afflicted species. 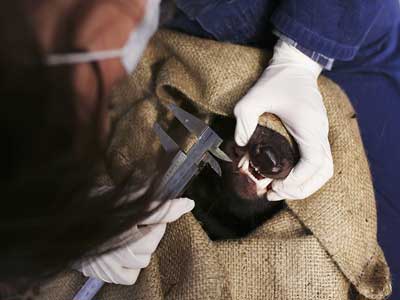 Vaccination might seem like the easiest way to stop Devil Facial Tumor Disease (DFTD) from infecting more Tasmanian devils. Cancer research for humans focuses a lot of time and funding on searching for a cure, so why not do the same for the devil? In short, time and funding is precisely what scientists studying DFTD lack. Already, the Tasmanian devil preservation program is cash strapped. Acquiring additional funding for the work necessary to create a vaccine might be an insurmountable hurdle. And even if scientists found an effective medicine, inoculating all the Tasmanian devils in the wild would be a difficult -- if not impossible -- undertaking.

­Breeding the disease susceptibility out of Tasmanian devils might be a more feasible route. DFTD has affected Tasmanian devils in the eastern part of the island the most, where the popula­tion is the highest. Scientists hoped that a devil named Cedric from the west held the key to halting the cancer. Immunologists injected the Tasmanian devil with live tumor cells, and after five months, Cedric's body produced antibodies to fight the virus. Scientists therefore hypothesized that Cedric might have a slightly different genetic coding that triggers a stronger immune response. By cracking that genetic code, scientists could develop a potential method for identifying and quarantining other resistant devils. After reintroduction into the wild, the immune devils would breed and form a stronger population.

A tracking project in the northwest corner of the island has also found that the spread of DFTD has diminished somewhat, which may have to do with the slight genetic variation Cedric exhibited [source: Clausen]. In case the wild species collapses from DFTD, the Tasmanian government hopes to assemble a captive breeding population of 1,500 resistant devils. The beginning stages of that federal breeding program that has started on the Tasman-Forestier Peninsula. Wildlife researchers trap and euthanize infected Tasmanian devils and tag healthy ones. So far, their efforts have resulted in an 8 percent drop in disease prevalence rate [source: Trofimov]. The Tasman-Forestier Peninsula was chosen as the project location because it attaches to the main part of Tasmania by only a narrow bridge. If the project is deemed a success, the government may fence off the peninsula from the mainland to protect the healthy devils from DTFD.

As of fall 2008, DFTD had decimated at least half of the devil population. If the species were allowed to disappear entirely, it would have a deep impact on the island's ecology. The carnivorous marsupials keep the cat and fox population in check. No more devils would mean a spike in the number of those predators, which would spell the demise of more than a dozen other species, including some birds and lizards [source: Hansford].

The outlook for Tasmanian devils grew even dimmer in December 2008 when Cedric, the potentially immune devil, developed two cancerous tumors on his face. With that news, scientists didn't completely accept defeat, but it has forced them to revise their strategy. There's still a chance that captive breeding could produce a stronger, more disease-resistant generation. But in such a limited gene pool, the DFTD crisis could be too much for the pugnacious devils to fight off.