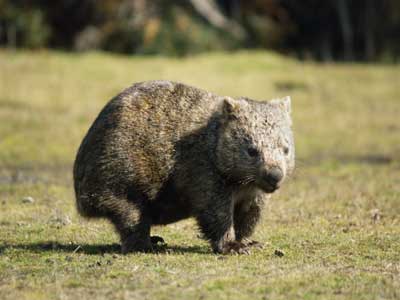 Why does this critter leave behind cube-shaped scat? See more pictures of marsupials.
Ken Findley/Getty Images

Whether called poop, scat, No. 2 or another one of the bountiful euphemisms available, it all refers to the same thing for every animal. We eat, we digest, we defecate. Then, if you're human, you usually get it out of sight as quickly as possible. After all, who readily volunteers to change a baby's dirty diaper or scoop up the dog's doo-doo? Feces makes most of us uncomfortable, and perhaps that's a useful trait since it can pass along parasites and disease.

But when you're out in the wild, you can learn a pile of information from a pile of animal droppings. Like a check-up list at the doctor's office, a thorough examination of scat can educate you about the health of the animal responsible for it and the ecosystem it lives in. First, the physical properties of the feces quickly indicate whether it came from a carnivore or herbivore. Generally, herbivorous fecal matter is more compact and geometric, like the rounded pellets made by deer and rabbits [source: McDougall]. The size is also proportional to the size of the animal that produced it, so those deer pellets will be smaller than what's produced by a moose.

For animals, encountering scat gives them a quick rundown of the species, sex, age, health and sexual maturity of its source. This can prevent violent run-ins between competing animals and alert members of the same species that there are others in the area ready to mate. In predator-prey situations, the prey may leave multiple droppings in an area to throw the predator off its trail [source: McDougall]. However, for all the information excrement holds and the important role that it plays in maintaining equilibrium within ecosystems, except for a handful of exceptions, animals don't poop where they sleep.

Knowledge of scat variations in animals comes in handy for hunters and wildlife experts as well. They can look at a mound of dung, analyze how fresh it is and what's in it and then identify the animal and eventually pinpoint its location. Even for the scat novice, one Australian mammal has a very recognizable fecal calling card. After digesting its food, the wombat leaves behind piles of cube-shaped pellets, resembling a set of pungent dice.

Since we know that stool says a lot about an animal, what does the peculiar shape of wombat scat tell us?