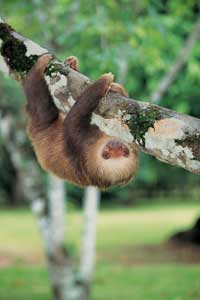 Let's say you're driving around an unfamiliar city one day and you get lost. The odometer racks up more and more miles as you try to find a landmark to reorient yourself. Then, the gas light flickers on, and you start to panic because you have no idea where the nearest gas station is. What do you do to ensure that you don't become stranded? You would have to maximize the return on every drop of fuel burned. For instance, if it's a summer day, you'd turn off the air conditioning and roll up the windows. You'd probably drive at a steady clip and try not to gun the engine.

Like pacing your car when it's low on gas, sloths move slowly to conserve energy as well. In fact, they move slower than any other mammal on Earth. The arboreal animals are known for taking their sweet time getting around, usually trekking no farther than 125 feet (38 meters) in a day [source: Cohn]. On the rare occasions when they're on the ground, sloths crawl at a glacial pace of about 1 foot (30 centimeters) per minute [source: Cohn]. This sluggishness has earned sloths a negative reputation in the human world -- even one of the seven deadly sins shares their name. Yet, a sloth's lethargic nature allows it to make the most of its surrounding resources.

­Sloths have little energy at their disposal for darting around at fast speeds because of their herbivorous diet. Native to the Americas, sloths spend most of their lives nestled between or hanging upside down from tree branches in tropical rain forests in Central and South America. Cecropia trees were nicknamed "sloth trees" because people thought sloths preferred their leaves; however, extensive observation has shown that sloths feed on many tree species [source: Lowman et al]. When hunger strikes, sloths simply reach out to the nearest available branch, pull it close and tear the leaves off with their lips. You probably wouldn't move around too quickly either if you had a permanently stocked minifridge within arm's length.

But imagine if you ate nothing but salad greens for a week without taking in any fats or protein. You probably wouldn't have a ton of excess energy to, say, sprint around the block. Likewise, sloths' diets, which may also include fruits, flower buds and branches, don't provide much nutrition. To compensate, sloths have a host of adaptations in addition to their slow pace that allow them to survive on such a lean diet. 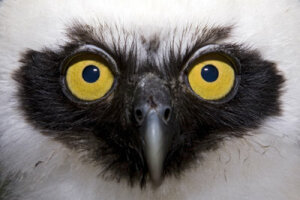 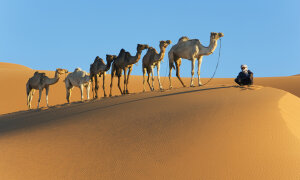