Why do warthogs have warts?

Warthog Warts: the Bigger, the Better 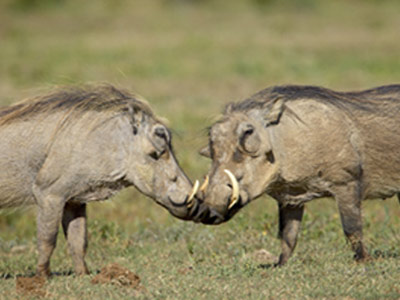 While humans generally put warts into the "ick" category, for warthogs, warts are a saving grace. People generally rush to the dermatologist at the first sight of a tiny bump, but as far as warthogs are concerned -- the bigger, the better.

This is because warthog warts aren't really warts at all: they're thick, fleshy growths of skin that serve as a form of protection. You can actually tell the sex of a warthog just by looking at its face. Males have four warts, two large ones beneath the eyes and two smaller ones just above the mouth; females have two small ones right below their eyes.

A boar's warts serve as a type of armor during their fights with other males -- somewhat like the padding a football player might wear. When the boars charge with their pointy tusks, the warts shield their face and eyes from the blow. Since the females are sensible enough not to fight one another, they don't need all that protection, and thus, have fewer warts.

­When they're not fighting over mating partners, male warthogs tend to stick to themselves. Females, however, may live with their young and other females in groups of up to 40. Opportunistic creatures, warthogs like to rest in holes abandoned by other animals. Since they don't have fur or extra fat for warmth and protection against the elements, they use these holes to shield themselves from extreme temperatures. The holes also make good hideouts: When the warthogs need to escape a threat, they back into the hole and guard the entrance with their threatening tusks.

For more on warthogs and other animals with interesting appendages, nose through the links below.

Since sows have only four teats to feed their young, they typically don't have more than four piglets at a time. Each piglet gets its own teat and feeds on it exclusively. Even if one of the piglets dies, the others won't use the available teat.