Imagine you're a 99-year-old woman and you wake up in the middle of the night with a mid-sized furry animal curled up on your chest. You don't have any pets, so you scream. The animal also screams, but it sounds unfamiliar — like no other scream you've ever heard. Everybody's screaming and then the animal runs up into the attic. What would be your first assumption about the species of animal you just encountered?

Well, in the case of the unnamed elderly Miami woman who actually did wake up with a strange animal sleeping on her chest one night in 2016, she had no idea who she was dealing with. Was it a cat? A lemur? A raccoon? After a few hours, the family member charged with luring it out of the attic decided it must be a kinkajou — an arboreal mammal native to Central and South America — and, plying it with cherries and some kinkajou videos she found on YouTube, lured it into a pet carrier.

Turns out this kinkajou was someone's pet — her name is Banana — and she had been missing for a week before she found her way into this woman's house, looking for snuggles. This was not the case, however, in 2019, when another kinkajou forced entry into a home in Lake Worth, Florida, presumably looking for food (somebody in the family had fed the animal watermelon the night before), "bum-rushing" a man and scratching up his legs and feet before holing up in the bathroom, where it whiled away the hours climbing the shower curtain and slamming the toilet seat until the authorities arrived.

These stories make it seem like kinkajous (Potos flavus) are very forward — aggressive, even. Both these Florida animals were most likely brought to the U.S. through the exotic pet trade and were accustomed to getting their needs met by humans. In the wild, kinkajous are shy, nocturnal foragers that skitter around the forest avoiding jaguars. Though they're omnivores, they belong to the order Carnivora, most of which (with a few exceptions like the giant panda) eat mainly meat. In fact, their diet makes them important to their home ecosystems — they sometimes eat termites and other small animals, but the bulk of their diet involves fruit, which leads to the dispersal of seeds around the rainforest, and the nectar of flowers, which they pollinate by sticking their faces in and excavating with their long tongues. They also love to raid bee's nests, earning them the nickname "honey bears."

Kinkajous are the only member of their genus, Potos, and are most closely related to raccoons, but don't really look it — they sort of resemble a weasel-monkey with little bear ears, if you can imagine that. Weighing between 4 to 10 pounds (2 to 5 kilograms), kinkajous stay busy all night, bustling around the treetops with impressive speed, facilitated by their specialized back feet that can turn 180 degrees and allow them to run backward almost as quickly as forward, and a powerful prehensile tail that not only helps them balance while zooming around in the trees, but lets them hang upside down to grab fruit.

Kinkajous are social, which may account for why Banana tried to cuddle with the lady in Miami, but mostly they like to stick to their own kind. Although it's legal to keep them as pets in some countries and U.S. states, a special permit is usually required, because while they're pretty docile, they use their teeth when they feel threatened, as heiress Paris Hilton found out when her illegal pet kinkajou Baby Luv bit her in 2006, which required a trip to the emergency room. A year before that, Baby Luv scratched Paris while they were out shopping together.

Which is why it's best to leave kinkajous in the rainforest.

Now That's Interesting
Kinkajous rarely come down from the treetops, which means they drink water that has pooled up in leaves and in the nooks and crannies of tree trunks.

20 Facts About the Statue of Liberty 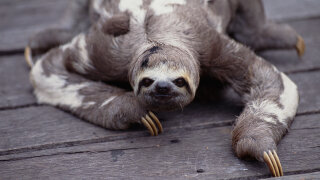 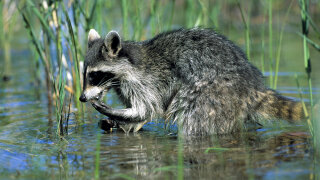 Why Do Raccoons Wash Their Food? 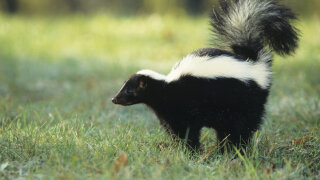 5 Mammals That Are Adorable … and Toxic