How Do Snails Get Their Shells?

Browse the article How Do Snails Get Their Shells? 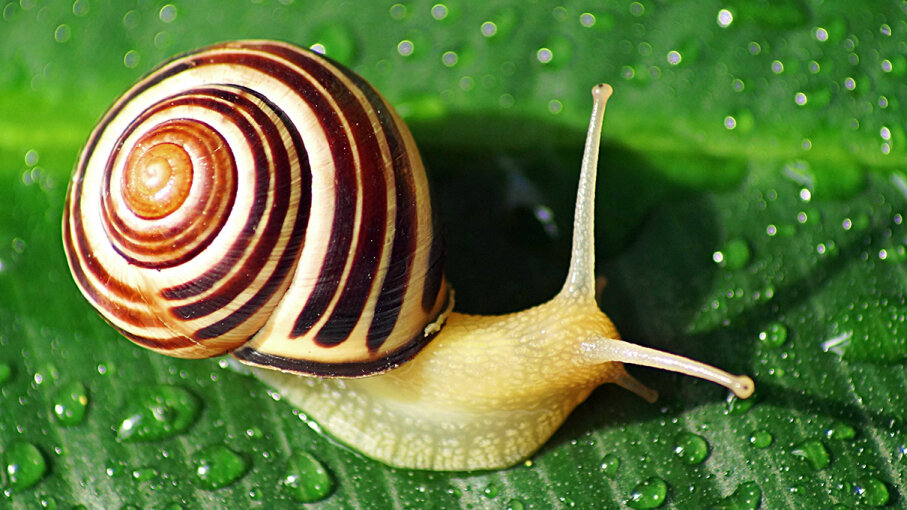 A snail's shell, which is made up of primarily calcium carbonate, begins forming during the snail's gestation period. Klaus Vartzbed/EyeEm/Getty Images

A lot of people like to spoil their pet hermit crabs. Do a quick Google search and you'll find designer shells built especially for the pocket-sized crustaceans. There's a market for the pretty trinkets because hermit crabs (mostly) live inside empty shells that other animals have left behind. Take one of these crabs out of its portable home and it'll scuttle off to find a new one.

Snails don't have this option. The slow-moving mollusks grow protective shells to which they are physically attached. Eviction means death, as no snail can survive being torn away from its private, calcified fortress. But how exactly do snail shells develop — and what sets them apart from some other types of animal armor?

Before we get to that, a bit of snail 101: The total number of snail species could be as high as 43,000. Most of us are familiar with the land-based varieties or those that live in ponds, but marine snails also exist. When it comes to procreation, certain species reproduce sexually while others are self-fertilizing hermaphrodites. Hey whatever gets the job done, right?

They do all have one thing in common: Snails all hatch from eggs. Generally, the parents lay these in loose soil or affix them to rocks, though a few species are ovoviviparous, meaning that their eggs hatch inside the mother's body. The newborns then squirm out and face the world.

Now back to that question on the shell. It's during the gestation period that a snail's shell begins to form. The mantle is a crucial organ possessed by mollusks such as snails. Its function? Making and developing shells. Calcium carbonate is the primary ingredient in snail shells (though small amounts of protein also go into the mix). So in order to build these shells, the mantle creates an electric current that helps the organism push calcium ions into place.

Before hatching, a baby snail grows a protoconch, the first component of its shell. Once our little snail leaves the egg, healthy eating becomes a priority. The mantle will require additional calcium to strengthen and expand the shell. Instinct compels newborn snails to devour what's left of the calcium-rich egg they've just escaped. And thus begins a lifelong habit.

Snails of all ages and sizes need to keep eating foods that are high in calcium. This is one reason why the mollusks are so often considered pests; a few of them like to chow down on spinach, broccoli, turnip and other calcium-loaded crops. They can also get their calcium fix by swallowing soil or gnawing on limestone.

The protoconch comes with a small opening, or "mouth." The mantle adds new layers of calcium carbonate and proteins to the mouth from below. As the new material hardens at the mouth, the shell grows. Spiraling coils form around the protoconch, which gradually spins around and around, becoming the apex — or uppermost tip — of the snail's widening shell. Depending on the species, the protoconch will either remain there permanently or break off at some point.

Unlike nautilus shells, snail shells always coil to the left or to the right. That's another thing that varies from species to species. Most snails possess rightward-pointing shells, but there are a few whose shells are oriented toward the left. And in some species, the shell can coil in either direction.

If you were to cut open a snail shell, you'd notice several main layers in the cross-section. At the surface, there's the periostracum, a thin outer layer usually made with organic material. Below that, you've got a layer of hard calcium sitting atop a blanket of nacre — a resilient composite material better known as "mother of pearl."

One thing you won't find, however, is a network of nerves and blood vessels. Turtle shells contain both. In most cases, the shells we find in these much-adored reptiles are really networks of modified bones — like ribs, vertebrae and pelvic elements — that've been fused together and covered by hard plates. When a turtle's shell gets cracked, the body dispatches cells to try and repair the damage. Snails have a different method for fixing cracks: Calcium and protein secretions from their mantles can be used to help strengthen the damaged area.

Of course, having a shell — even one that can heal itself — does not guarantee safety. Ironically, a lot of nesting birds like to eat snails because their "protective" shells contain so much calcium. To keep one step ahead of predators, many snails have seriously upped their self-defense game. For example, the deep-sea species Chrysomallon squamiferum is covered in iron sulfide, giving the entire animal a strange, metallic appearance. Researchers have looked into the possibility of using this animal's amazing exterior to develop better armor for human soldiers. It wouldn't be the first time military technology took a cue from Mother Nature.

Now That's Interesting
A few snails — including some members of the Trochulus genus — have hair-like structures covering their shells. Scientists don't know what they're for, but it's possible that the little appendages might help the snails crawl across wet surfaces more easily.