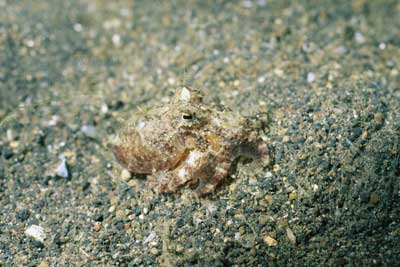 You have to look closely to see thisoctopus camouflaged in the sand.
Wolcott Henry/Getty images

The secret sauce for the octopus's color-changing talent is its chromatophores. These pigmented cells contain three sacs of color each, and tens of thousands of them cover the octopus's skin. Each chromatophore is surrounded by muscles that change how the pigment is displayed by relaxing or contracting. A publication from the Smithsonian Institution likens the phenomenon to a drop of ink on a rubber band: when the band is loose, the color is concentrated in one spot and not readily visible. But when the band stretches, the color spreads out [source: Smithsonian National Zoological Park].

Each chromatophore is independently controlled by the nervous system, which enables a high degree of complexity in the display of colors. The high level of control by the nervous system also means the color-change splashes the skin in a flash – an octopus can change its appearance in less than a second. Reflective cells on the skin, called iridophores, further accentuate the dramatic color changes by mirroring the surrounding environment's colors. Projections on the skin called papillae add to the disguise by changing textures to blend more readily with substances like coral or sand.

In addition to confusing predators through color and texture changes, the octopus has a secret weapon: ink. An ink sac is located near its digestive system, and when necessary, the octopus can eject ink out of the sac along with a burst of water from the funnel. The combination creates a black cloud. The octopus can shoot the ink out in little blobs that serve as decoys, or it can shoot it out in one big mass to obscure a quick getaway. To top it off, the ink contains tyrosinase, a compound that impairs smell and taste, which further confuses the predator.

It takes a big brain and a sophisticated nervous system to keep track of thousands of chromatophores and bursts of ink. Read on to learn about the systems that make it all possible.