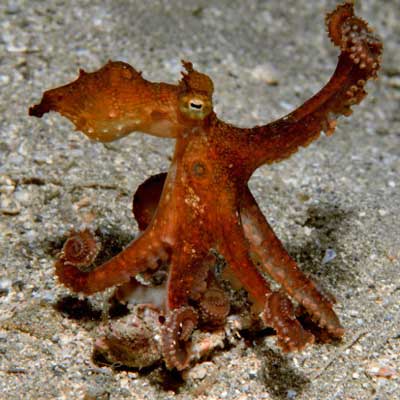 A two-spotted octopus blends in to itssurroundings by mimicking drift kelp.
Norbert Wu/

Octopuses in captivity present researchers with an excellent opportunity to learn more about their personas. Research on the octopus is still relatively new d­ue to the animal's reclusive nature. It's fairly well-accepted among researchers that the octopus is an intelligent creature – stories abound of those octopuses that manage to escape from their aquariums to pry open bins of food, and those that learn to solve mazes or pick up red balls as opposed to white ones [source: Stewart]. But could they have personalities?

After she heard that some interesting octopus characters at the Seattle Aquarium were given names – a practice generally reserved only for the most advanced species – marine biologist Jennifer A. Mather wanted to find out the answer. Thus, Leisure Suit Larry, a particularly touchy-feely octopus; Emily Dickinson, a recluse; and Lucretia McEvil, who destroyed the interior of her tank, became the starting point for a revealing study.

To be fair, personality is a hard thing to prove, but Mather and marine biologist Roland C. Anderson pinned down a method for the study: They would identify a number of personality traits and then rate each animal against each of those traits. They exposed 44 red octopuses to three different situations seven times, each for a period of two weeks. Did the octopuses show personality? The answer was a resounding yes. In all, the test octopuses displayed 19 distinct behaviors, which the researchers categorized into three buckets – activity, avoidance and reactivity. Emily Dickinson, for example, would have been rated low on activity, high on avoidance and low on reactivity because she liked to stay in her den no matter what. You can find more about the personality study in the February 2007 issue of Natural History.

Mather and Anderson went on to find that octopuses apply their intelligence to practical situations as well; they wanted to see if an octopus would change its eating methods when presented with different kinds of prey. What would an octopus do if it found a clam difficult to pry open, for example? Anderson and Mather gave the octopuses clams that are usually simple to open, but wired them shut. Not to be outdone, the octopuses simply switched to drilling into the shell to get at the succulent meat. The two scientists also observed that after just a few unsuccessful tries, juvenile giant Pacific octopuses quickly learned how to efficiently drill near the center of a clam to get at the meat inside [source: Mather].