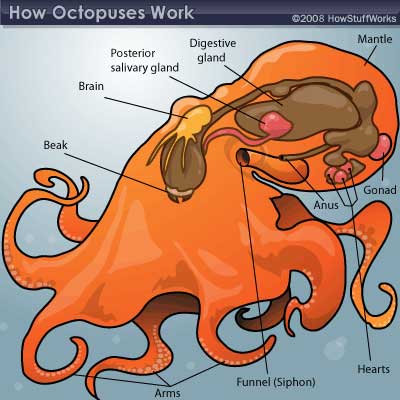 The octopus belongs to the phylum mollusca, where you will also find its slimy next of kin, the clams, snails and slugs. But octopuses are separated from the mollusks into the class cephalopoda, which includes the most advanced animals of the phylum. Squid, cuttlefish and nautilus belong to this class as well. The octopus has evolved most since the cephalopods originated more than 600 million years ago. While the other cephalopods sport some form of inner or outer shell like their relatives the mollusks, the octopus has none.

The word cephalopod literally means "head-footed" and refers to the fact that these animals' arms branch directly off of their heads. Some cephalopods have tentacles as well as arms, but the octopus manages just fine with the eight arms it uses for practically everything: eating, moving, hunting, tasting and mating.

Behind the octopus's head, directly opposite the arms, is its mantle. The mantle is a highly muscled structure that houses all of the animal's organs. Its gills, hearts, digestive system and reproductive glands are all crammed into this one space. The strong muscles in the mantle protect the organs and help with respiration and contraction. The octopus also has a funnel, sometimes called a siphon, which is a tubular opening that serves as a pathway for water. You'll find out the purpose for this funnel later in the article.

In place of the protective shell found in many other mollusks, the octopus brandishes a startling array of defense mechanisms. One researcher who calls octopuses "the wizards of camouflage" goes so far as to say that chameleons are humdrum by comparison [source: Stewart]. Masters of disguise, octopuses can alter their skin to take on a diversity of colors and textures to blend in with their surroundings.

On the next page, find out more about the octopus's magical ability to change colors in less than a second.

Not all blood is red like ours; the octopus's blood is blue. The blue color comes from hemocyanin, the copper-containing protein that binds oxygen in the octopus. Human blood is red because its oxygen-binding protein, hemoglobin, contains iron. In addition to being blue, octopus blood is a poor carrier of oxygen, which helps explain the animal's sometimes apparent laziness. To cope with the low oxygen levels, the octopus maintains a constant high blood pressure and has three hearts. Two of the hearts pump oxygen-rich blood through the gills, while the third circulates it through the rest of the body.