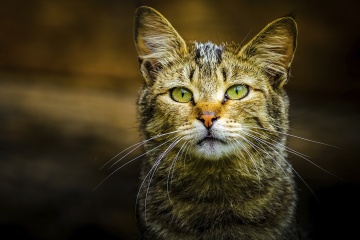 Even though picking up stray cats may be hard to resist, it's better to be safe than sorry. Feral creatures can spread diseases that could seriously jeopardize your health.
s_derevianko/Thinkstock

It's no secret that Americans love cats; there are more than 74 million felines kept as pets in the United States, with another 60 to 150 million million feral or free-roaming cats trying to make it on their own [source: Weise]. While many pet cats are spayed or neutered and up-to-date on life-saving vaccinations, feral cats are unlikely to receive this type of preventative care, allowing them to breed without restriction and to spread scary diseases, including rabies [source: Hildreth et al].

Rabies, a viral infection that's 100 percent fatal, is spread to humans via bites or scratches from infected animals. Cats are currently the primary domestic animal associated with rabies exposure in humans. If bitten by a rapid animal, humans must undergo a series of shots in order to produce the antibodies required for survival. Around 16 percent of people who require these shots get them after being exposed to the virus by a cat [source: Weise].

While vaccinating cats against this disease can help prevent it from spreading, the nature of the vaccination makes it notoriously difficult to vaccinate feral cats. For this vaccine to work properly, cats need one shot as young kittens, another when they reach their first birthday, then a booster every three years after that. The odds of catching a feral cat that many times throughout its life is very unlikely, leaving the animal vulnerable to the virus [source: Weise].

Perhaps even more frightening is the threat of toxoplasma gondii, a parasite for which cats are the only known host. In some studies, as many as 80 percent of feral cats test positive for this parasite [source: Hildreth et al]..

Cats shed this toxoplasma gondii in their feces, where it can easily spread to other animals by contaminating water and soil. Animals, including racoons, squirrels, mice and rabbits who pick up this parasite could experience neurological problems and even death [source: ScienceDaily].Toxoplasma gondii infections in humans can even occur years after the parasite has been shed by the cat. That means feral cats who hang around playgrounds, sandboxes or your garden pose a significant health risk even long after they've moved on. You can pick up this parasite if you ingest tainted water or soil, which could occur when kids are playing in the backyard or if you fail to wash produce you've picked in the garden [source: Gerhold and Jessup].

So what does exposure to toxoplasma gondii do to humans? It can have devastating effects in pregnant women, resulting in anything from stillbirth to long-term neurological problems for the fetus. It's also linked to difficulty in school when ingested by children, as well as schizophrenia and other mental health problems in people of all ages [source: Haensch].

Though less common, feral cats can also transmit diseases like typhus, cat scratch fever and even the plague [source: Gerhold and Jessup]. Clearly, none of these things are on anyone's wish list.