What ingredients are important in senior dog food? 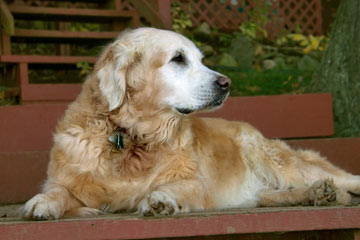 If you know of a particular health condition your senior dog has, that can guide you toward the right ingredients to include in his dog food -- for instance, glucosamine for dogs with arthritis. See more dog pictures.
©iStockphoto.com/Dianne Maire

Talk to enough veterinarians about the nutritional needs of so-called senior dogs and you'll get very used to hearing this answer: It depends. It's certainly not the result of vets being evasive or unhelpful; it's just that the reality is that there are so many breeds and sizes of dogs -- many with their own particular diet-related health concerns -- that blanket statements are tough to make. Even what age equates to senior status varies according to the breed and size of a dog. "Dogs are considered geriatric at various ages depending on the breed. Smaller breeds will begin to be considered as senior at about 10 or 12 years old while the largest breeds are considered as senior at 5 or 6 years of age," says Deena Krestel-Rickert, who runs Missouri-based Pettec, a pet food consultancy. "On average, though, most veterinarians consider a dog senior at 7 or 8 years."

Whether you have a 10-year-old Chihuahua or 5-year-old Great Dane -- and regardless that vets don't want to make sweeping pronouncements about diet -- the fact is that senior dogs do have changed nutritional needs [source: Krestel-Rickert]. Like aging humans, older dogs tend to exercise less and thereby need fewer calories. "Generally, older dogs need a complete and balanced diet that is lower in calories but still has protein and fat and more fiber," says Krestel-Rickert. "Some can be fed a normal diet, but in smaller quantities."

Beyond that general observation, there are more specific conditions common in older dogs that require dietary tweaks. For example, Dr. Jules Benson, a vice president of veterinary services at the pet insurance company Petplan, notes that elevated levels of antioxidants can provide some benefit in fighting senile dementia in dogs, while upping fatty acids and glucosamine can help relieve arthritis and joint pain.

Furthermore, says Benson, dogs with liver, kidney or heart disease can be aided by limiting intake of phosphorous, protein and sodium. Krestel-Rickert agrees that senior dogs with decreased kidney function can benefit from a reduced-protein diet, since it takes some strain off of the kidneys. At the same time, she says that some senior dogs are prone to constipation, so a diet higher in fiber can be wise.

The question of what ingredients to avoid is more involved and, once again, depends on the specific health condition of a senior dog. But there is one admonition that applies to all dogs, young and old. "The only ingredients to reliably avoid are those that are toxic to dogs," Benson says. "For example, grapes, raisins, chocolate and melamine, obviously."

Others involved with senior pet nutrition cast a wider net. Susan Thixton, author of "Buyer Beware: The crimes, lies and truth about pet food," says that pet owners should be aware of by-products. "By-products are parts of a slaughtered animal that are not commonly consumed by humans," she says. "However, by-products can include feathers, fur, intestines, and unhealthy or diseased internal organs." This doesn't mean the pet food company is doing anything illegal, but these may not be items you want your dog to eat.

How to Read a Pet Food Label 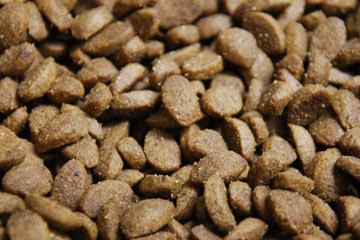 Some vets say the best way to know what's in your dog's food is to ensure that chicken or some other meat is the first ingredient, while others insist you know the first five ingredients because those five are the basis of the food.
©iStockphoto.com/Liza Barry

If anything, reading a pet food label is even more confusing than trying to decipher what's in the food you buy for your family. According to Thixton, the Food and Drug Administration (FDA) oversees pet food safety, though just about all of the regulations, ingredient definitions and guidelines are developed by the Association of American Feed Control Officials (AAFCO), which is made up by representatives of individual state Departments of Agriculture. So, like so many other things, there are dual federal and state authorities. Most state Departments of Agriculture require pet food companies to register all of the products sold in their state and all of those offerings are supposed to be examined, though the sheer volume of pet food and treats makes that a daunting task [source: Thixton].

So what are some things to look for with dog food you buy for your senior? To start, Thixton says that any claims made on the front of the package stating special benefits for older dogs should be ignored because AAFCO has no guidelines around senior pet food. "There are guidelines for low fat, dental, even hairball claims," she says. "But no guidelines for senior pet food claims."

Still, there are some basic points to remember. First of all, if you know of a particular health condition your senior dog has, that can guide you toward the right ingredients to focus on -- for instance, glucosamine for dogs with arthritis [source: Benson]. More generally, though, it's helpful to know that pet food labels list proteins and fats as minimum percentages and not maximum levels. In other words, that means that a listing of 14 percent fat or protein could actually be 30 percent, which has real implications if you're trying to keep your dog's weight down [source: Thixton].

Also keep in mind that the order of ingredients listed is based on their pre-cooked weight. For some vets, the best approach is to make sure that chicken or some other meat is the first ingredient, while others insist on examining the first five ingredients because they constitute the majority of the food. For his part, Petplan's Benson says a good approach to finding the right food for your dog is to look for an AAFCO "complete and balanced" label. This label, combined with a list of quality ingredients will ensure that your senior dog is getting what it needs nutrient wise.

"Based on industry standards, a meal that has all of the required nutrients can be fabricated from things that we would consider inedible," he says. "While nutrients are very important, the ingredients that provide them are also important. Look for foods with quality ingredients backed up with an AAFCO statement."

Benson also says that when it comes to adding supplements or changing your dog's diet as it gets older, it's important to observe your pooch closely and use common sense. "If you have a senior dog with no health complaints that is doing well on his senior food, there is probably no need to change his diet," says Benson. "However, if your dog is slowing down mentally or physically or has other diseases associated with geriatric dogs, changing his diet to a senior diet or other therapeutic diet is probably your best bet."

Ragdoll Cats Are the Floppiest, Friendliest Felines Around
Black Neon Tetra
How to Pick Up a Cat