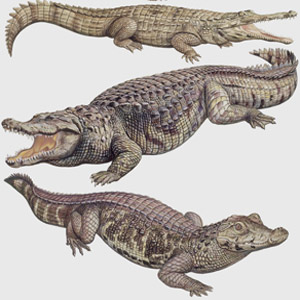 Here's a bit of interesting trivia for you: All alligators are crocodiles, but not all crocodiles are alligators. Sound confusing? It's really not once you look at the taxonomy.

Both alligators and crocodiles are members of the reptilian order Crocodylia. But the families they belong to, Alligatoridae and Crocodylidae respectively, differ. Often, when people use the word "crocodile" what they really mean is "crocodilian." This term encompasses not just the common alligators and crocodiles you might already know, but also the lesser known Gavialidae family that contains the lone gavial, or gharial. All told, there are 23 species of crocodilians.

As a group, crocodilians are pretty impressive animals: Their lineage goes back 240 million years, meaning they've outlived the dinosaurs by a good 65 million years. Ideally suited for life in water and on land, members of the order can swim up to 20 mph (32 kph) and run up to 11 mph (17.6 kph). They're most at home in the water and can hold their breath for up to an hour. Eyes situated atop their heads enable them to keep a lookout for prey, while their powerful tails swiftly propel them through the water.

Crocodiles and alligators are top-notch hunters and will eat just about anything they can get their teeth on, from fish and turtles to monkeys and buffalo. With teeth specialized just for spearing, neither family even bothers to chew its food -- they swallow large chunks or the entire animal whole.

As if that weren't scary enough, crocodilians have incredibly powerful senses to detect their prey. Their eyesight above water is top notch, and thanks to vertical pupils that can open up extra wide to let in additional light, they also have keen night vision. And even though you can't see their ears, don't be fooled -- these small slits are sensitive enough to hear offspring calling from inside their eggs [source: San Diego Zoo]. Even their sense of smell is highly developed due to special organs in their snouts.

Impressive similarities aside, the difference between alligators and crocodiles can be found in key areas -- for one thing, "Alligator Dundee" just doesn't have the same ring to it. 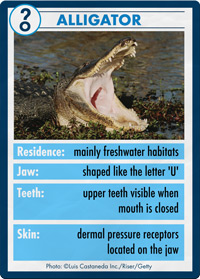 Coral Snakes: Brightly Banded and Highly Venomous
Here's Why You Shouldn't Eat a Box Turtle in the Wild
Alligators Go Back 6 Million Years Further Than Thought