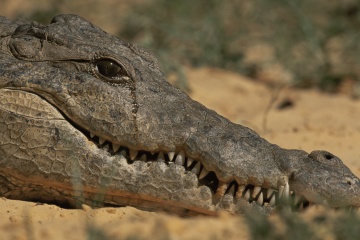 A captive crocodile appears to be shedding some tears. Have you ever found tears welling up in your eyes even when you're not sad, maybe when you've eaten some spicy food or were having a sneezing attack?
© Anup Shah/Corbis

What is it about the crocodile that makes us think "insincerity"? After all, when we accuse someone of being insincerely sad, we don't call out their beaver tears or trout weeping. Why not? Is the crocodile a particularly deceitful creature?

A belief began centuries ago that crocodiles snare their prey by weeping, and then snatch the creature in their jaws and make a feast of it. Curiously, they were also said to "cry" during the meal [source: Dent]. You might see why someone would accuse the croc of false emotion, as they watched the animal sob over a dinner it gleefully murdered.

Is there even any truth to the tale? Turns out that it's not so far-fetched -- crocs really do shed tears over the corpses of their victims. But don't think they're raging sociopaths: They have a biological basis for the act that has nothing to do with a show of fake emotion. Make no mistake -- crocodiles really do shed tears, just like you, me and the cat [source: Handwerk]. Moisture collects in their eyes and eventually spills out and trails down their face like a sad clown. But why when they're eating?

It's not easy to test. Crocs aren't so safe to cuddle up to. Add to that the fact they are often in water, and testing whether their eyes are wet gets even harder. However, researchers conducting a study in 2006 trained seven crocodilians to move to a dry feeding station and then filmed their responses [source: Shaner]. And it was mostly true: Five of the seven observed animals shed tears while eating. (Note: Animals from the order Crocodilia include crocodiles, alligators, caimans, the gharial and the false gharial.)

They can't say for sure why, but scientists think it might relate to the huffing, puffing, hissing and blowing sounds the crocs make while eating. It could push air through the sinuses and stimulate glands to cause overproduction of tears [source: Handwerk]. They also wonder if it's simply the movement of the croc's head while eating that causes the tears to spill [source: Handwerk].

Either way, there's no reason to think the crocodile is having some sort of emotional response to its catch. So give the crocodile a break: Next time you doubt someone's sincerity, just tell them. No reason to drag a croc into it.

How Snake Handlers Work
From the Rhino to the Corn: 10 Facts From the Wide World of Rat Snakes
Here's Why You Shouldn't Eat a Box Turtle in the Wild