Other Developments in Animal Imprinting Research 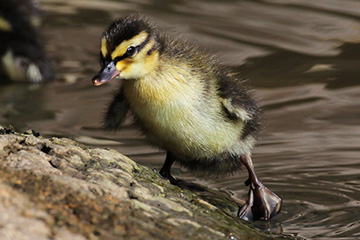 Building on the research of Konrad Lorenz, researchers have found that the harder mallard ducklings work to follow what they think is their mother, the stronger the imprinting effect.
Matt Cardy/Getty Images News/Thinkstock

Further experiments in the 1950s revived interest in the imprinting phenomenon. German-born scientist Eckhard Hess built a laboratory in Maryland with his partner, A. O. Ramsey, a high school biology teacher. The lab setting allowed the researchers complete control of the environment to study imprinting in mallard ducklings. They found that the ducklings' most sensitive period of imprinting was actually 13 to 16 hours after hatching. Furthermore, the ducklings that had to climb hurdles or travel farther to follow the model duck formed a stronger attachment to it. Not only would ducklings imprint onto papier-mâché ducks, but also onto colored spheres. Unsurprisingly, Hess also found in later experiments that ducklings became more attached to models that moved and made noise than models that were more stationary or quiet [source: Price].

Although Hess accepted Lorenz's theories that imprinting happened during a critical period and was irreversible, other researchers questioned these conclusions. In the 1960s, other experiments revealed that social isolation changes a duckling's window of "imprintability." When kept socially isolated, for instance, the duckling can still imprint 20 hours after hatching. This means that experience alters imprintability, suggesting that the window isn't entirely genetically determined [source: Hardy]. As a result, researcher Wladyslaw Sluckin proposed using the term sensitive period rather than critical period. What's more, other experiments suggested that imprinting could be reversed by gradually introducing a bird back to its own species.

Research has revealed that sexual imprinting is also possible in altricial birds (those that are more helpless at birth). Experiments during the 1960s and 1970s revealed that a bird can show sexual preference for its own species without having any experience with another of its own species. Researcher Patrick Bateson wanted to reconcile the ideas that sexual preference is partly genetically determined but also capable of being influenced by experience via imprinting. His experiments suggested that birds prefer sexual mates that are within their own species but don't prefer those of the opposite sex to which they were exposed early in life [source: Bateson]. So, he theorized that the purpose was to balance inbreeding and outbreeding. Birds are genetically predisposed to mate with their own species but also must rely on experience to ensure they don't mate within their immediate family. Sexual imprinting has also been grouped with other methods of how animals learn socialization under the more general term of species imprinting.

Lorenz and the Nazis

Although Konrad Lorenz would later disavow Nazi sympathies or wrongdoing during the war, it is now believed that he played an active role in the Nazis' eugenics practices. As a psychologist in an SS unit, he would judge individuals to be Polish-German "hybrids" and therefore unfit to breed. According to some, his beliefs in racial purity influenced his interpretations of scientific data and shaped some of his theories [source: Klopfer].