Will birds really abandon their young if humans disturb the nest? 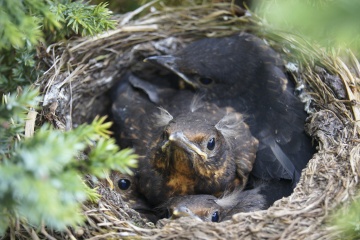 What a cute little bird? But think before you touch the little creature, it's mother may not be accepting visits.
pixLB/Thinkstock

If you're terrified of birds (they have claws like jungle animals and jaws that crack nuts, people), you probably have no problem with the "don't touch the baby bird or the mother will abandon it" idea. Fortunately, there are kinder people in the world who are genuinely interested in saving abandoned birds and feel that orphaning helpless animals is wrong.

And for them, here's some good news: You shouldn't fear that your horrible human stench will mark a baby bird for the orphanage.

So let's just get a few things straight from the get-go: First, birds don't really even have that great of a sense of smell. Their olfactory nerves aren't terribly sophisticated, and only a few birds have an adaptation that signals them to certain scents. That's helpful for a vulture hoping to catch a whiff of decaying matter, for instance, but a robin isn't going to have some special "human detector" built into it [source: Boyd].

So before we get further into the question at hand, let's answer a related one. If you do find a baby bird (without fledgling feathers, meaning that it's too young to practice flying) that's fallen out of its nest, it's perfectly reasonable (and kind) to gently deposit it back home [source: Cornell Lab of Ornithology]. You're not giving the bird the scarlet "H" human scent and leaving it for dead by any means. (Do note, however, that you might want to observe from a distance to make sure the parents aren't around; they could very well be waiting until you're gone to pick up Junior [source: Sweetbriar Nature Center].)

Now, the answer to whether birds abandon their young if humans disturb the nest is a little more complicated. For one, it depends on the bird itself. Hawks, for instance, might be more willing to abandon their young if they think a predator attack is imminent, while a robin might not see the same risk in a disturbed nest. Keep in mind that it probably comes down to individual situations as well. If a robin sees her nest is disturbed and she's only very recently laid her eggs, she might be more willing to fly off than if she has a nest full of fledglings almost ready to fly [source: Boyd].

So don't give Mama Bird a bad rep. Overall, she's like most other animals -- far too invested in her young to fly off and abandon her young. While there may be exceptions to this, don't let the thought trouble you when depositing a fallen baby bird back in its home.

Can Different Bird Species 'Talk' with Each Other?
Only Birds Have a Syrinx and That's Why They Sing
Penguins: The Monogamous Tuxedoed Birds That 'Fly' Underwater