If a Peacock Loses His Tail Feathers, Do They Grow Back?

A peacock without his feathers is like a king without a crown, a tiger without its stripes, a cowboy without his boots. The male of the peafowl species, the peacock has long symbolized beauty, regality and pride. Like many male birds, the peacock's appearance far outshines that of the demure peahen, and he showcases these famous feathers to drive those chicks wild.

But every year, toward the end of summer, peacocks finish shaking their tail feathers, and their stunning plumage gradually falls off. This shedding process, called molting, is a common part of most birds' lives. Feathers can wear out and lose their functionality over time, and since these feathers aren't self-regenerating, birds must replace them entirely. This molting process is the same type of biological change that happens when snakes shed their skins. Hormones trigger the beginning of the molting process, which is timed to occur after the mating season to allow for the energy required to grow the new feathers [source: Cornell Laboratory of Ornithology].

In about seven months – in time for the peafowl mating season to come back around – peacocks will regrow their plumes longer and fuller. The peacock's tail reaches peak development around age 6 [source: Hopkins]. In fact, mature peacock trains can extend more than 5 feet (1.7 meters) in length [source: National Zoo]. Because of the size boost from the feathers, peacocks are one of the largest flying birds.

When the old feathers drop, however, people don't let them go to waste. Stretching back to the Phoenicians during biblical times, peacocks were taken from their native residences in India and surrounding countries and transplanted to royal homes [source: National Zoo]. Different peafowl species feature blue, green, white, light brown or purple coloring, but India's blue and green bird is the most common. There, the peacock is not only the highly protected national bird, but also is considered sacred within the Hindu religion. Even today, commercial peacock breeders will save the molts to sell as the demand for these stylish feathers in the home décor and fashion industries endures.

At the top of each peacock train feather, you'll see a round, jewel-toned ocellus or eyespot. Ocellus comes from the Latin word "oculus," which means "eye." These iridescent spots add the exotic dimension to the plumes.

Peacock tail feathers are specially structured to ensure that they reveal each brilliant ocellus whenever the bird fans them out. This is accomplished by combining multiple layers of feathers on top of each other, called upper-tail coverlets [source: National Zoo]. To the naked eye, the ocelli appear different shades of blues and greens, but in actuality, the feather fibers have a black pigment. It's the different angles of the nanoparticles within those fibers that catch and reflect the sunlight to create iridescence [source: Milius].

In rare circumstances, peacocks may be born without any pigment. These albino peacocks are entirely white, although their feather structure remains the same. Even the ocelli are easily detectable.

During mating season, the males clump together in territorial groups called leks. Peahens will stroll through the leks, almost as though window-shopping for a new beau. To grab the females' attention, the peacocks will display their full regalia, stepping around excitedly and shaking their plumes. Ornithologists refer to that dating dance as shivering.

Charles Darwin had speculated that the number and brilliance of those ocelli determine how successfully peacocks will attract peahens. Due to this form of sexual selection, he proposed that peacocks gradually evolved with more ornate trains to appeal to peahens.

But a 2008 study in Japan challenged the long-held belief behind the ornamentation of peacock trains, asserting that the more shake a peacock shows toward a peahen, the greater the likelihood of snagging her. Because of that interaction, the researchers theorized that it is perhaps this movement and mating calls – not the famous ocelli – that influence attraction the most [source: Viegas]. During a seven-year study of peafowl mating rituals, the researchers found that even the peacocks with the drabber fan and fewer ocelli hooked up as much as the showboats. But going up against Darwin isn't a simple feat. The scientific jury is still out on whether we can dismiss peacock ocelli's role with luring the ladies in.

How Peacocks Got Their Spots

According to Greek mythology, peacocks got their spots thanks to a woman named Io. She was a priestess to Hera, the wife of Zeus. Famous for his wandering eye, Zeus took a fancy to Io and turned her into a heifer in order to disguise her, thus protecting her from the wrath of jealous Hera. Hera was onto his ruse and tricked Zeus into giving her the heifer/Io as a present. Once she had the heifer in her possession, Hera appointed Argus, a man covered with eyes, to guard Io. Zeus then sent a minion to rescue the priestess, who killed Argus in the process. As a tribute to Argus and his many eyes, Hera bestowed the "eyespot" onto the peacock. 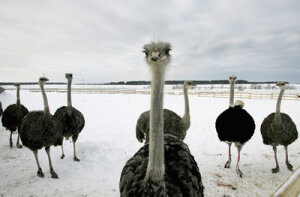