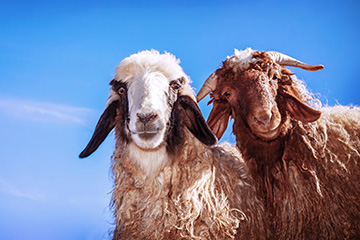 Male sheep raised by goats had a harder time learning to love the ladies of their own species.
Anna Omelchenko/iStock/Thinkstock

Strictly speaking, imprinting is a phenomenon exclusive to certain bird species, just as Lorenz meant it when he coined the term. But as we've seen, subsequent research has revealed imprinting to be more flexible than Lorenz originally thought. This calls into question the phenomenon's rigid definition. Furthermore, researchers have borrowed the term in studying how early experience can affect behavior in other types of animals.

One of the most fascinating studies involved cross fostering sheep and goats. During the 1990s, researcher Keith Kendrick and his colleagues switched sheep and goats at birth. The animals were allowed social contact with their own species while being raised by their adoptive species. It turned out that the adopted animals preferred to mate with the species of their adoptive mother [source: Price].

Interestingly, however, the male animals were more affected by this social imprinting than the female animals. Males were more likely to prefer to socialize and mate with their adoptive species, and researchers found it was harder to reverse their imprinting. After the first year of being raised by a different species, the adopted animals were reunited with their own species and removed from contact with the other species. Once a year, the researchers would allow the adopted animals contact with their adoptive species to assess their preference. Females could reverse their sexual preference back to their own species in one or two years, whereas males' sexual preferences still hadn't changed after three years [source: Goodenough et al.].

Other landmark studies have explored the effects of mother-infant bonding among mammals. Famously, researcher Harry Harlow discovered rhesus monkeys preferred surrogate model mothers wearing terrycloth as opposed to surrogate model mothers made of wire but providing food. It's believed that giant pandas won't prefer to mate with each other if handled by humans from a young age. As a result, some zookeepers dress in panda suits.

The Dangers of Human Imprinting

Erroneous imprinting on humans can obviously have adverse effects on individual animals and their ability to survive in the wild. Birds that imprint on humans struggle to learn survival skills or to assimilate back to their own species. When possible, conservationists avoid direct human contact with hatchlings born in captivity and often use surrogate parents from the same species. Some endangered birds require human assistance to survive, but dedicated conservationists can carry these birds in powered parachutes or ultralight planes to teach them migratory routes.

Folk wisdom tells us that childhood is an impressionable time. The Jesuits have the saying, "Give me a child until he is 7 and I will give you the man." And of course, we have the animal adage, "You can't teach an old dog new tricks." These sayings imply there's something special about youth: A young person or animal is moldable and teachable. On the same token, this means that whatever is taught during this impressionable period will be difficult or impossible to unteach later. In the animal world, the fascinating phenomenon of animal imprinting supports this theory.