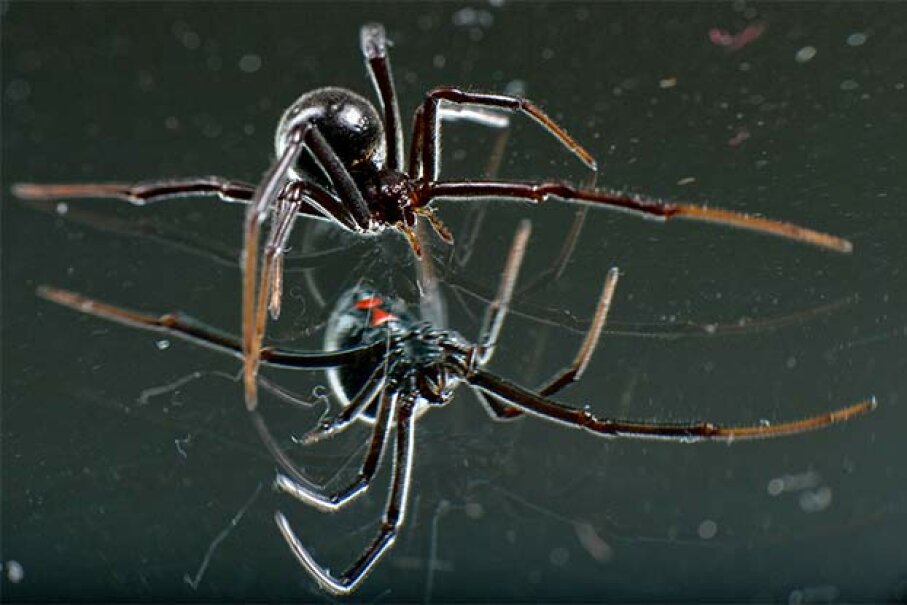 With the telltale red hourglass visible on her abdomen, a female black widow spider craws over the surface of a mirror -- just one example of a beautiful and terrifying spider. See more pictures of arachnids. © Robin Loznak/ZUMA Press/Corbis

In the 1977 low-budget horror film "Kingdom of the Spiders," which probably represented the nadir of actor William Shatner's career after the original "Star Trek" TV series, terrified, shrieking humans are threatened by an army of tarantulas who've been turned into mutant killers by pesticides [source: Murray].

But even if you missed that one on Netflix, there's a fair-to-middling chance that spiders make you at least a little apprehensive. One 2012 study estimated that 7 percent of the U.S. population suffers from arachnophobia, a pathological fear of the multilegged, crawling little creatures [source: Lutz].

Spiders tend to give us the creeps partly because our brains were hard-wired by evolution to dislike angular shapes -- such as those of spider legs -- and make bad associations with the dark colors that often adorn spiders. Additionally, our eyes are designed to spot rapidly moving objects on the edge of our vision field, which in turn tend to trigger a fear response [source: Cohen].

But it's kind of crazy to be afraid of spiders. While there are a few venomous species -- such as the black widow and brown recluse spiders -- most aren't dangerous to humans. Indeed, many are beneficial because they eat other pests in our homes and gardens [sources: CDC, Waldvogel and Apperson].

And if you can get over your fear and take a good look, some spiders are even beautiful. Here are 10 of the most fascinating -- and OK, a little scary -- ones around. 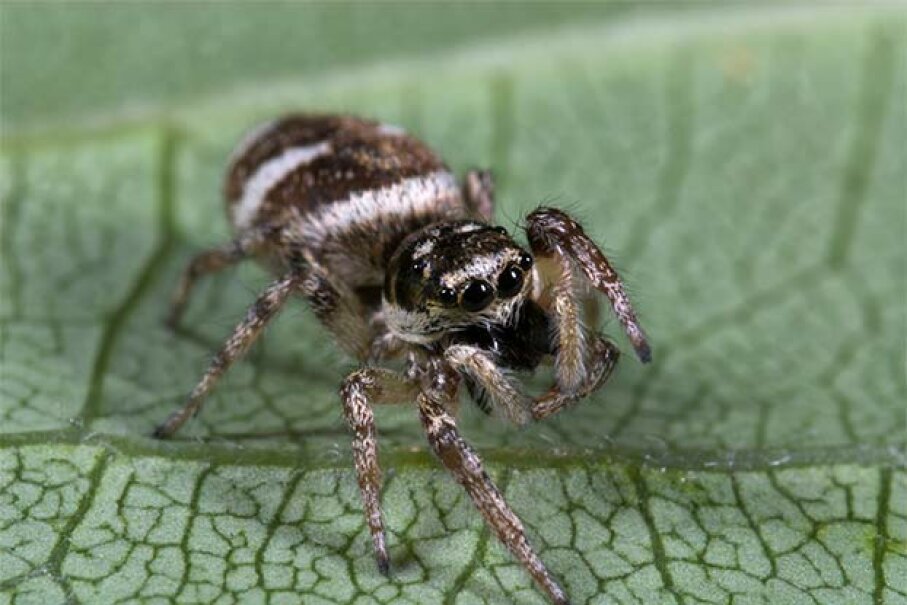 The jumping zebra spider has eight eyes arranged in three rows; the main two are extremely large and are used for binocular vision. © Robert Pickett/Visuals Unlimited/Corbis

If the notion of a spider leaping in your direction is worrisome, try imagining one that, relatively speaking, has way more "ups" than Michael Jordan in his prime. Salticus scenicus, which is found in North America, Europe and northern Asia, can jump an astounding 20 times its own length [source: Earth Rangers].

Before you totally freak out, keep in mind that the jumping zebra spider is only about a quarter of an inch (7 millimeters) long, so it's not likely to do you much harm [source: Earth Rangers]. Besides, these arachnids primarily feed on pesky insects such as mosquitos and flies, so they're very beneficial to humans [source: ADW]. And when it looks at you with those plaintive eight eyes, who could resist its charm? 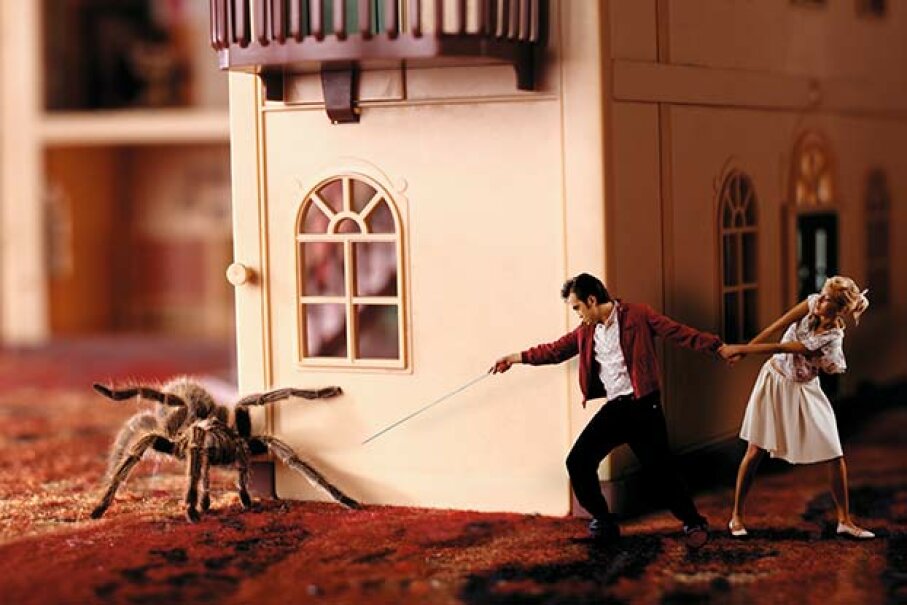 Lycosa tarantula, also known as the European tarantula, is a pretty scary-looking guy. Though mainly found in southern Europe, this hairy creature, whose body can be as long as 1.2 inches (3 centimeters), is in great demand in Hollywood [source: Burke Museum]. Special-effects people cast it whenever there's a script calling for a venomous spider to menace a hero or grow to enormous size and terrorize a town.

But looks can be deceiving. While it is true that Lycosa tarantula is capable of biting a human, its venom has a very low toxicity, and less fearful individuals may actually keep them as pets. However, you can get a minor skin rash or eye-and-nose inflammation from handling one, so be sure to wash your face and hands afterward. Further, Lycosa tarantula has been found to be not a tarantula (Theraphosidae) at all, but actually belongs to the family of wolf spiders (Lycosidae) [source: Burke Museum]. 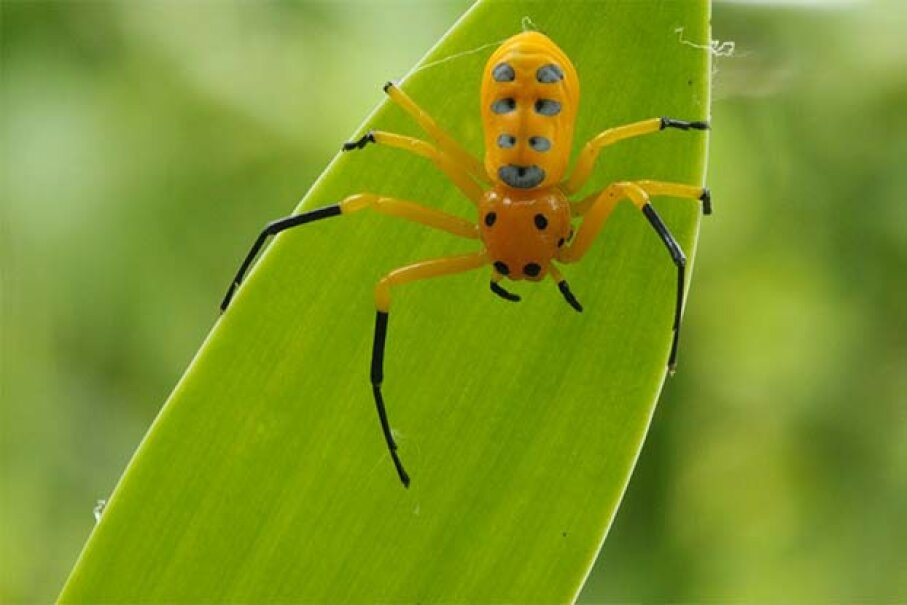 This is one attractive spider. In case you're keeping count, the eighth spot is on its abdomen. Cai Yixiong/National Parks Board, Singapore

Platythomisus octomaculatus is one of the most festive-looking spiders around. With a bright yellow body and black spots, it looks almost as if it's dressing up as a ladybug for Halloween [source: Wired].

Discovered in a forest preserve in Singapore in 1924, this spider lives in the foliage of small trees and has been observed only sporadically ever since. It's one of the biggest types of crab spiders, at about 1 inch (2.5 centimeters) in length. Today, scientists believe its existence may be threatened by disturbances to its habitat [source: Singapore Red Data Book]. 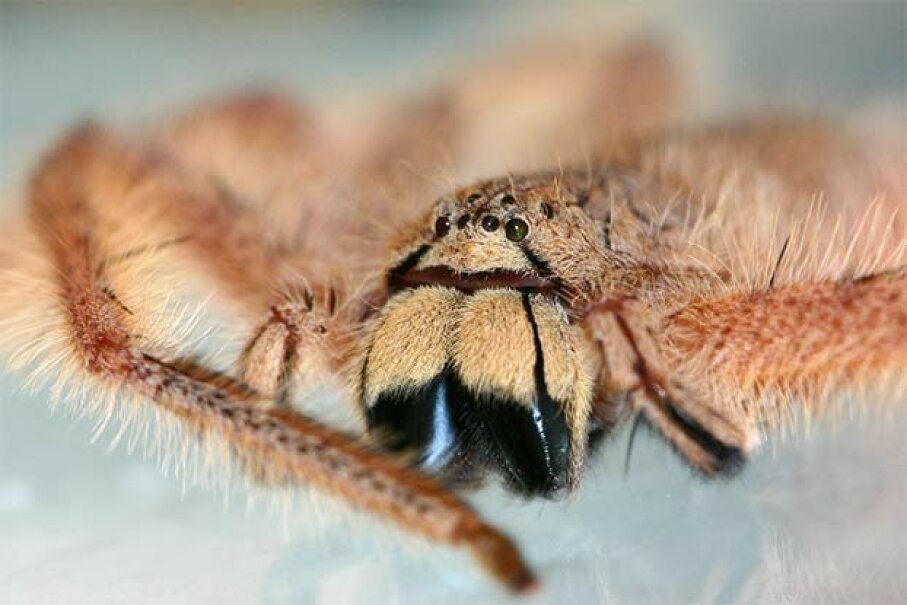 The David Bowie spider is named after the singer who used to sport a red mane and fronted a band called the Spiders from Mars. Senckenberg Research Institute and Natural History Museum Frankfurt/Peter Jaeger

A spider has to be pretty extraordinary to be named after a British rock star. But Heteropoda davidbowie, whose name comes from the bright orange hairs on its red-brown body and legs, fits the bill. (During the early 1970s, Bowie sported a similarly colored mane and fronted a band called the Spiders from Mars.)

These spiders, which are found in Southeast Asia, can grow up to an inch (2.5 centimeters) in length. They don't sing or play the guitar, but they're usually pretty good hunters of insects and other spiders [source: Arkive]. 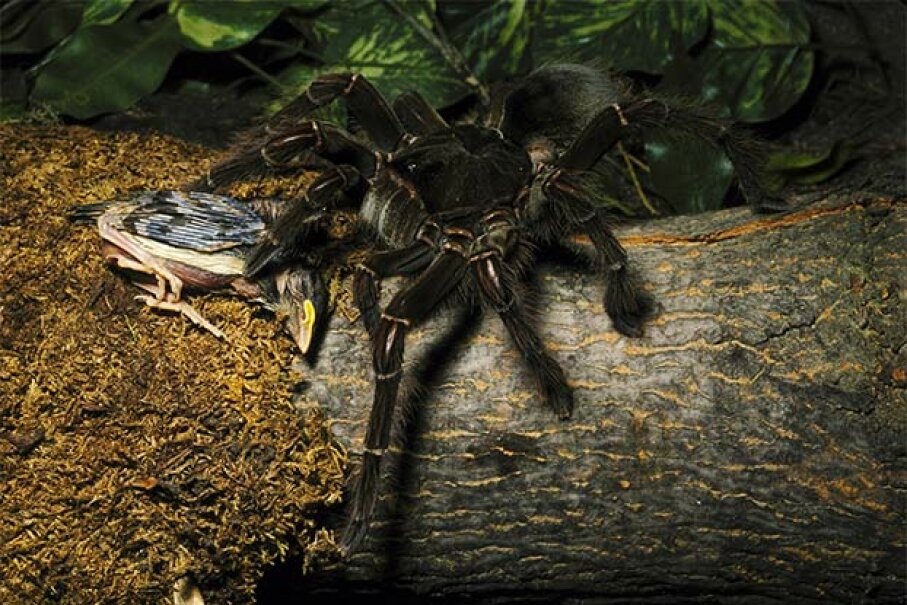 Despite its name (and this picture), the Goliath-bird eating spider rarely eats birds, prefering to dine on insects and frogs. John S. Mitchell/Getty Images

OK, now this one does look legitimately frightening, even to a spider fancier. Part of the tarantula family, Theraphosa blondi, found in Venezuela, the Guianas and Brazil, is the veritable Andre the Giant of spiders. The biggest specimen ever captured, a female named Rosi, weighed a formidable 6.1 ounces (175 grams).

Velvety black in appearance and equipped with fangs that are three-quarters of an inch (20 millimeters in length), the Goliath usually feeds on insects such as crickets and beetles. Despite its name, it rarely feeds on birds, but it's capable of killing and consuming bigger prey, like small mammals and frogs. If you get bitten by one, though, the effect is probably no worse than that of a wasp sting [source: Natural History Museum]. 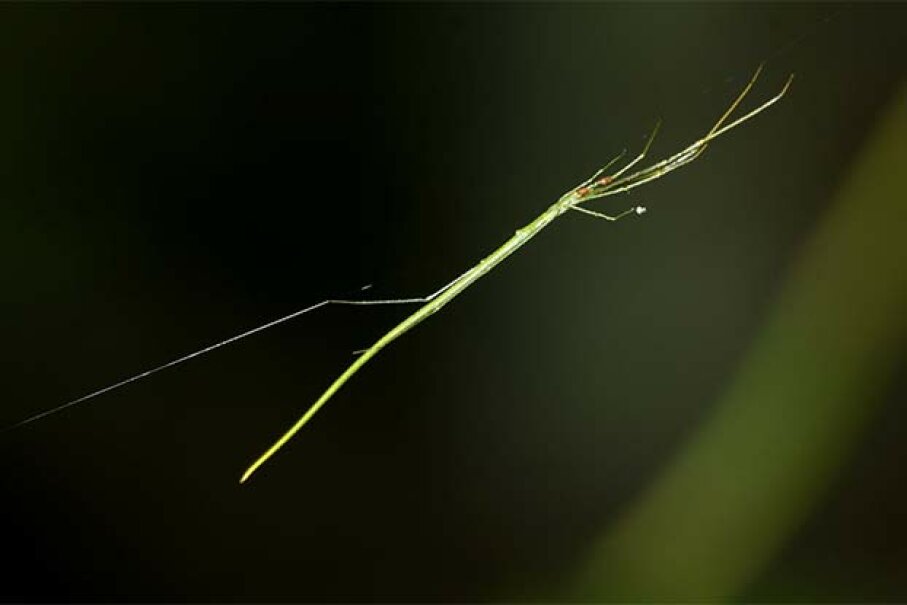 Rather than spinning the traditional orb-shaped web, the twig spider goes for a single-strand design. LifeDesks

Ariamnes flagellum, which is found in India, Southeast Asia and Australia and is about the size of a U.S. quarter, is one of the weirdest-looking creatures you'll ever see -- that is, if you aren't fooled by its ingenious camouflage.

The twig spider has a bright-green abdomen and lines up its tiny, thin legs in a straight line, so that it looks like the tendril of a climbing plant. The only time its presence is obvious is when it moves. Rather that spinning a typical spider's web, this crafty creature opts for single-strand in the shape of Y. But when an unwary flying insect lands on what it thinks is a safe perch, a nasty surprise is in store [source: LifeDesks]. 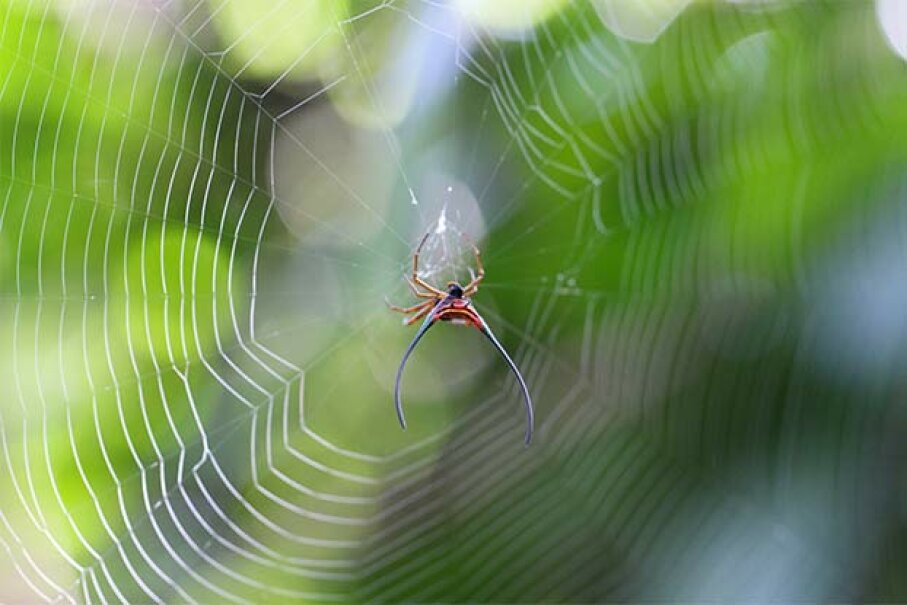 No one is really sure of the purpose of this spider's long horns. Some think it is to intimidate predators. Gido/Flickr

With its massive antenna-like horns, the spiny Macracantha arcuata looks like some sort of WiFi-equipped gadget. Nobody is really sure what purpose the horns actually serve, but it's possible that they are mostly for show, to make the spider look more intimidating to predators [source: Wired, World Spider Catalog].

Little information is available in scientific texts about this spider, although it was first discovered in the 1700s and lives in India, Borneo and China. The long-horned orb-weaver is so otherworldly looking that an illustration of it is actually included in an artist's guide to drawing mythical creatures [source: O'Connor]. 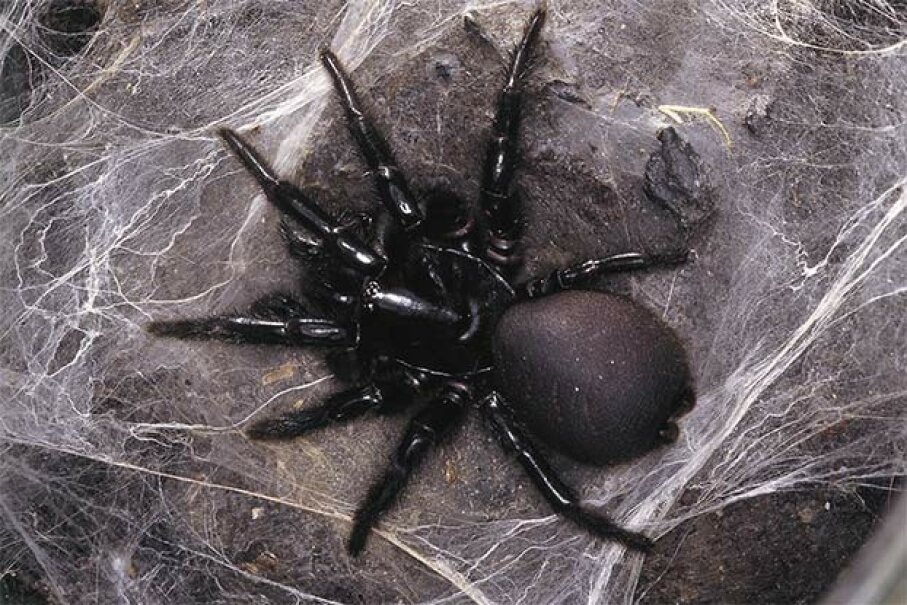 The Sydney funnel-web spider looks a little like a black leather glove -- and packs a punch too. © Esther Beaton/Corbis

Spiders who weave funnel webs are found in many parts of the world, but the scariest one of them all is the Sydney funnel-web spider, Atrax robustus, which lives within 100 miles (160 kilometers) of Sydney, Australia. These creatures have a body that's about 1.4 inches (35 millimeters) in length.

But the spider, which looks a bit like a tiny black leather glove formed into a fist, possesses a fearsomeness that isn't all show. These spiders are extremely aggressive and venomous, and the males have very strong fangs. A bite from this spider can be fatal if not treated immediately, so watch out [source: Fathallah]. 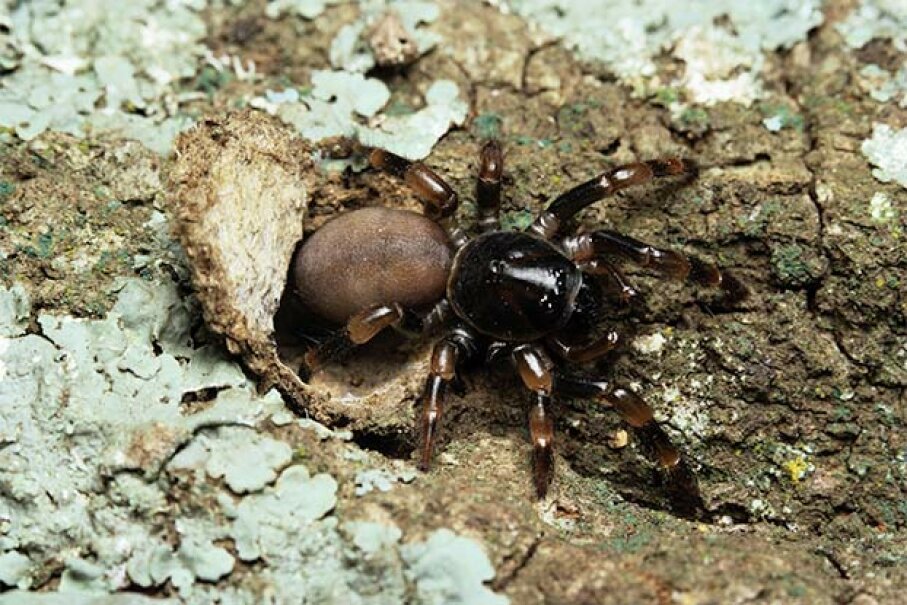 This type of trapdoor spider, found in South Africa, is in the same family as the one found in the caves of Malaysia. © Anthony Bannister/Gallo Images/Corbis

The trapdoor spider (Liphistius malayanus), which is about 1.75 inches (4.5 centimeters) across, is an ancient creature, part of a genus that may date back as far as 360 million years to the Carboniferous period.

It has lasted that long by hiding in cave walls in Malaysia, where it camouflages its nest with a trapdoor fashioned from mud and dirt, attached to six to eight signal threads. The spider waits underneath with its legs touching the threads. If an unwary insect lands on that spot, an alarm is tripped and the spider rushes out and grabs the victim and drags it into its lair. Fortunately, it isn't big enough to grab you [source: Liz Price]. 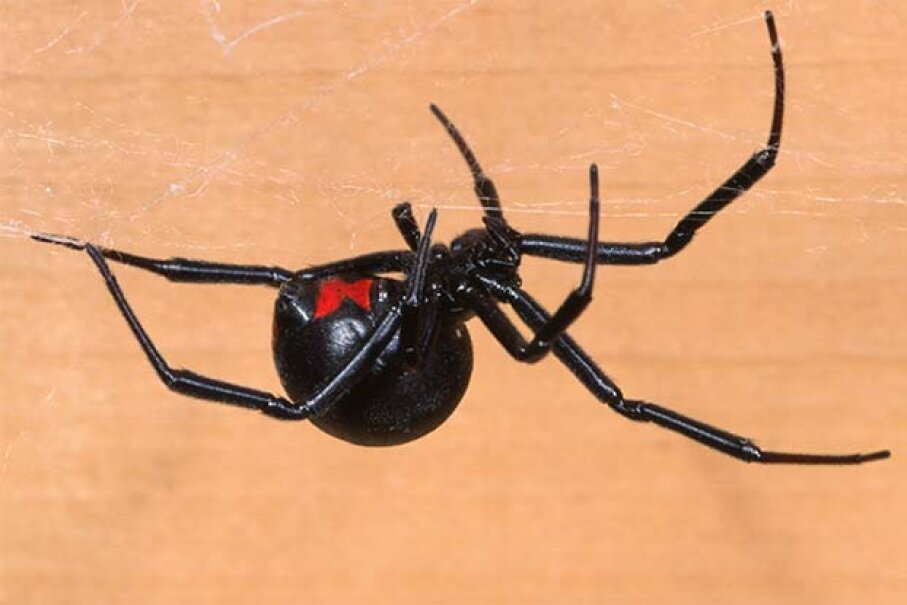 The black widow spider is so-called because the female tends to kill its partner after mating. © Michael Redmer/Visuals Unlimited/Corbis

We couldn't very well do an article on scary spiders and leave out the black widow, could we? Latrodectus Hesperus, which is found in temperate regions throughout the world, has a bulbous body and a distinctive, hourglass-shaped mark on its abdomen. It is just 1.5 inches (38 millimeters) in length, but its size is deceptive. The spider's venom reportedly is 15 times stronger than that of a rattlesnake, and if the creature bites you, the result is achy muscles, nausea and a paralysis of the diaphragm that can make breathing difficult.

Fortunately, most people who are bitten by black widows don't suffer any serious or permanent injury, though the venom can be fatal to small children, the elderly or people in poor health. Black widows are most infamous for their violent macabre mating behavior, in which females sometimes kill and eat their mates after copulation. And you thought "Love Hurts" was just an old heavy metal song [source: National Geographic]. 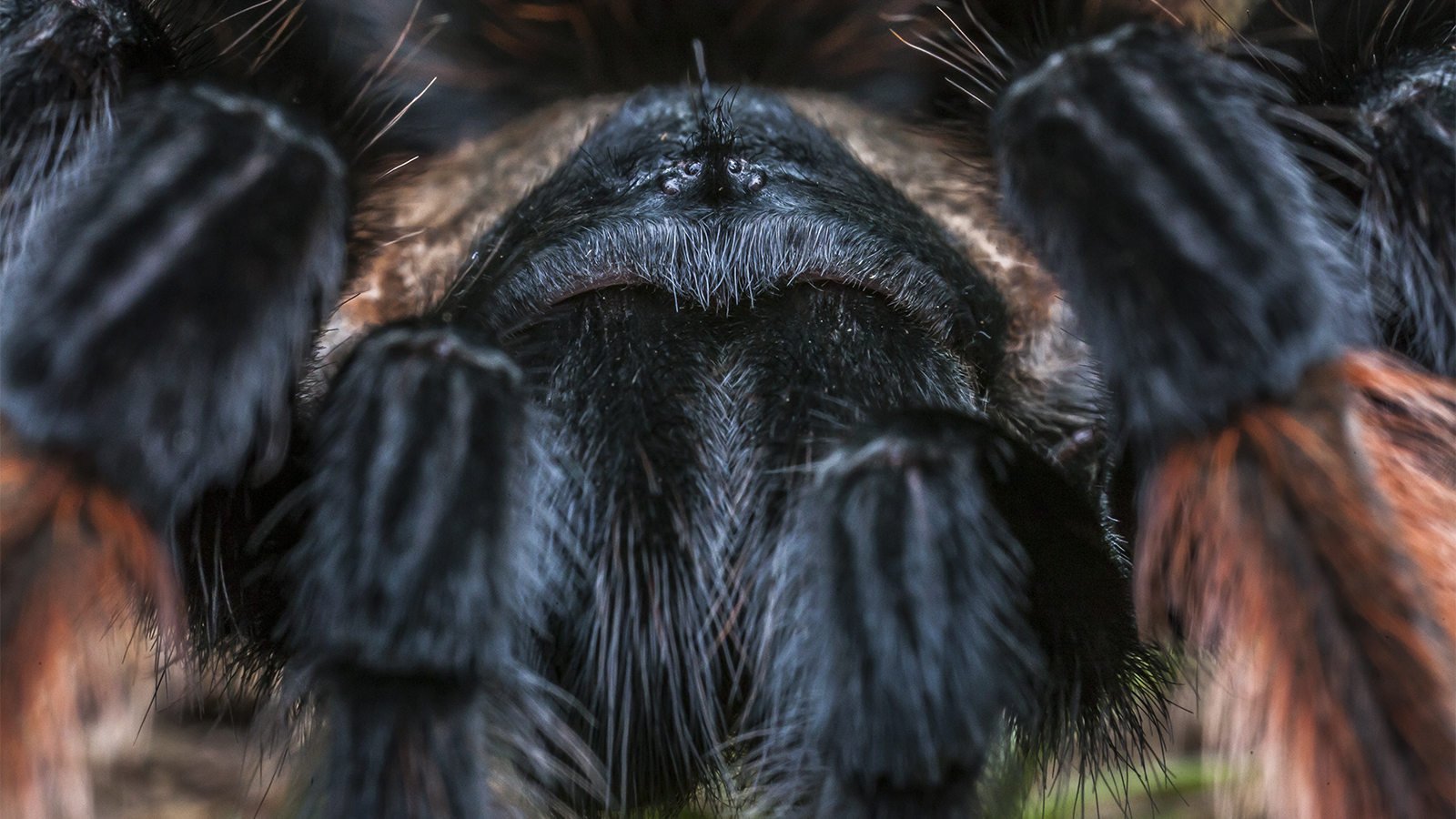 Tarantulas are the largest spiders in the world and some can live for up to 30 years. HowStuffWorks looks at these impressive arachnids.

I've always been interested in spiders, dating back to my childhood, when I noticed a spider build a web in the opening of our bathroom window. If I stood on the side of the bathtub, I could watch the spider maneuvering around on the silken strands. One day I noticed another insect -- it looked like some sort of beetle -- venturing into the web, and becoming entangled. After that, I watched in equal parts fear and fascination as the spider leisurely dissected and devoured its prey, in the equivalent of a miniature monster film that only I got to see. Unfortunately, soon afterward my mother apparently noticed the web and swept it away in the interests of neatness, and I had to find another source of entertainment.