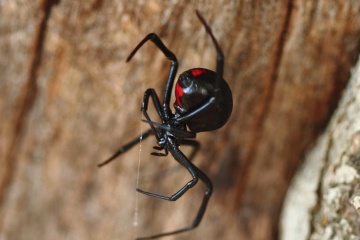 Black widows are among the deadliest spiders in the United States. See more pictures of arachnids.
iStock/Thinkstock

If Hollywood were a reliable source of scientific information, figuring out the most dangerous spi­der in the world would be a no-brainer. The furry tarantula has crawled across cinema screens in countless horror, sci-fi and adventure flicks, causing audiences to grip their chair arms in suspense. Will the hero escape quickly enough to avoid the poisonous bite of the ferocious spider?

In reality, our arachnophobia-induced aversion to tarantulas is misplaced. The formidable spider's bristly hairs are more likely to irritate than its venom. Although a bite from the passive tarantula will induce topical pain, it won't kill you unless you're highly allergic.

Of the nearly 40,000 known spider species, only a tiny fraction of them can inflict any significant pain in humans. In fact, there is no wholly accepted consensus on the world's deadliest spider because, by and large, spiders aren't much of a threat to our well-being. At the same time, the number of spider bites is often incredibly over-reported. In one study of 600 hospital patients claiming to have been bitten by brown recluse spiders in Southern California, doctors could confirm only 20 percent of the bite wounds as coming from the spider [source: Vetter and Visscher].

That said, there are a handful of arachnids around the world that it would be in our best interests to avoid. The overall morbidity rate of venomous spiders remains below 10 percent, but some of their poisons can induce tissue degeneration, cell death, nausea and other unpleasant side effects.

Before we get to the culprits on the list of the world's most dangerous spiders, it may be helpful to know how these arachnids deliver their fearsome bites. As you can read in How Spiders Work, venomous spiders are equipped with a poison gland that harbors the dangerous chemicals. Those glands are connected to a set of fangs that spiders use to deliver the poison into their victims. The fangs usually remain tucked inside the spider's jaws until it feels threatened. When that happens, it releases its fangs, digging them into the victim's body and secreting poison. Not all spider bites are potentially wounding. Many spiders give dry bites without venom as a warning.

Think it couldn't get scarier than running into a brown recluse or black widow on a bad night? Think again. 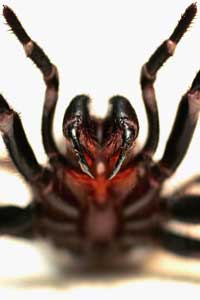 Exploding Ants Kill With Toxic Goo
Dracula Ant Is 5,000 Times Faster Than the Blink of an Eye
Spiders Can Spin Webs of Silk Stronger Than Steel