Diet of a Scorpion 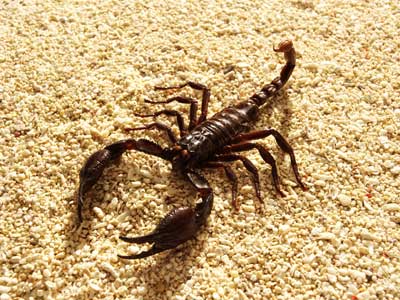 Scorpions can live without food or water for more than a year.
Gerry Ellis/Getty Images

You can find scorpions in almost every habitat in the world: tropical rain forest, savanna, desert, mountains and grasslands. They mostly hide out under rocks and logs to preserve energy and stay cool. Scorpions have multiple eyes like other arachnids, but they have poor eyesight. To make up for that, scorpions have special sensory feelers called pectines on the underside of their abdomens. Pectines can detect scent trails left by other scorpions as well as the surrounding air movement.

Although they're nocturnal, scorpions generally don't go out of their way to search for food. Instead, they are opportunistic feeders that wait for their food to come to them rather than wasting energy actively hunting. What types of food do they lay in wait for? Scorpions are carnivorous arachnids, like spiders, that primarily feed on other insects and even other scorpions.

A scorpion may display its cannibalistic tendencies even during mating rituals. After depositing a spermatophore outside of his body for the female to absorb through her genitalia, the male scorpion must crawl away quickly. If not, he may end up as his mate's dinner [source: Angier]. If this behavior sounds familiar, you're correct. Female black widow spiders are also known to prey on their male suitors.

But what happens when food doesn't come their way? With an adaption suited to their isolated living conditions, the scorpion possesses an incredible ability to slow its metabolism to a third of that in similarly-sized insects. During lean times, the scorpion's metabolic rate is the lowest of all invertebrates [source: Lighton et al]. At that pace, eating one insect can sustain a scorpion for a year. In order to turn down their metabolism, scorpions engage in minimal activity. In fact, in order to maintain that sluggish metabolic rate, many scorpions spend 92 to 97 percent of their lives completely inactive, sort of like an extensive state of hibernation [source: Leeming].

­Even when the scorpion's body has slowed down to barely functioning, it can still quickly snap into action to catch a meal. But when a scorpion attacks its prey, it doesn't immediately gobble it up. Rather, it first excretes enzymes through its fangs, or chelicerae. Those enzymes then break down the insect matter before it enters the scorpion's body in an example of external digestion. That way, the scorpion maximizes the nutrients that it sucks out of its meal without squandering the energy involved in internal digestion.

This lethargic existence works out well for the scorpion, which is able to survive as long as 25 years in a variety of climates. That makes it the longest-living arachnid species. Yet, given its Spartan diet, a scorpion that reaches its peak age may enjoy just over a couple dozen meals in its lifetime.

A protein found in scorpion venom could lead to a breakthrough brain cancer treatment. In isolation, the venom protein isn't harmful to humans and binds to cancer cells in the body. Radioactive isotopes attached to the protein could then the kill the cancer cells. Although researchers are still studying the success of this method, terminal brain cancer patients who received the highest doses of the venom treatment lived an average of three months longer than others involved in the study.