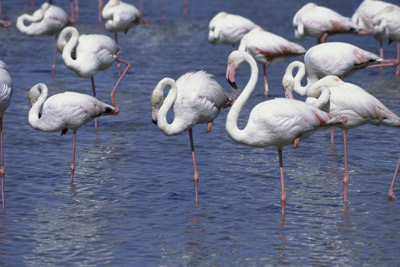 A flock of flamingos relax by standing on one leg. See more pictures of birds.
Purestock/Getty Images

In a large, shallow body of water, hundreds of flamingos congregate like an avian water ballet team: all preening their pink feathers, resting in the sun and standing on one leg for hours at a time. Flamingos even sleep that way.

It's a puzzle to science why, exactly, flamingos stand on one leg so regularly. But there are lots of theories on the subject. It's an impressive ability, considering flamingos'­ legs are longer than their bodies, and most of their weight is oriented horizontally. Humans are oriented vertically, with almost all of their weight in line with the center of gravity. It really should be easier for humans to stand on one leg than for flamingos. But most of us have trouble standing one leg for 10 seconds, let alone four hours like flamingos do.

Most large wading birds have the ability to stand on one leg, and flamingos are one of the biggest wading birds out there. They range from 32 to 51 inches tall (81 to 130 cm), but they don't weigh much -- just about 5 to 8 pounds (2 to 3.6 kg) [source: SeaWorld]. Combine their height with their coloring, and flamingos are one of the most recognizable birds in the world. They're practically a city logo in Miami.

It's startling to see a large group of pink, red or vermillion birds standing in a shallow pond. The color comes from the food they eat, including shrimp, which is full of carotenoid pigments (the same thing that makes carrots orange). Flamingos are always in groups, anywhere from a few birds to a few hundred or even thousands, and they live on every continent except Australia and Antarctica [source: San Diego Zoo]. They're very social, sleeping, preening their feathers and eating together. Imagine hundreds of birds with their heads under water, fishing. Or sort of fishing: Flamingos stick their heads in the water upside down and suck mud and water in through the front of their beak. The top and bottom of the beak have bristles that intertwine when they meet, forming a comblike filtering mechanism. The water and mud flow through, getting pumped out the sides of the beak. What's left is the flamingo's food, usually algae and small crustaceans.

They stand on both legs to eat, but on one leg to sleep. It seems like sleeping would require both legs on the ground for balance -- since the animal is unconscious. So why do flamingos do it? On the next page, we'll look into some of the most common theories. 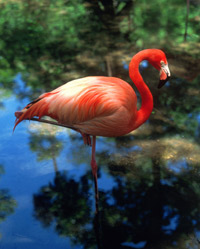 For more information on flamingos, wacky animal behaviors, bird anatomy and related topics, flock to the links on the next page.

We Need to Know Why the Female Bird Sings
Penguins: The Monogamous Tuxedoed Birds That 'Fly' Underwater
These Little Sparrows Judge Potential Mates on Dance Moves, Not Song