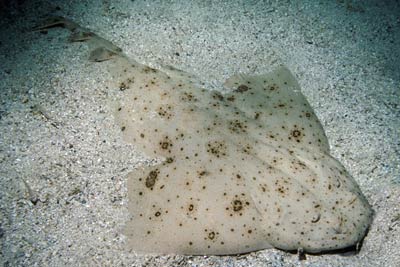 Are angel sharks the holiest fish in the sea? Their name certainly seems to indicate a pure and pious air, and some seafood connoisseurs say that a bite of an angel shark is like a little taste of heaven. Or did they get the name because it's a miracle that they're classified as a shark at all? After all, angel sharks certainly don't resemble the typical shark, which has a torpedo-shaped body and ominous fins that warn of its presence. Instead, the angel shark looks like it has been run over by a car or flattened by a very big iron.

The angel shark more closely resembles a skate or a ray, the bottom-dwelling cousins of the shark, but it's classified as a shark in the family Squatinidae, which has one genus: squatina. Squatina is Latin for "a kind of shark," perhaps reflecting early confusion about just what kind of shark this was. But certainly the name sounds right -- these sharks are stocky and shorter than other sharks.

But what about their other name, angel shark? Squatina's 19 species of angel sharks get their name from this atypical appearance. The flaps around their head are actually flattened pectoral fins, which gives them the look of a shark with wings or a halo, like an angel. Or perhaps if you see the hood of a monk's habit, you might call them by their other name, monkfish. While those flattened pectoral wings provide their devout moniker, they also represent the divine intervention that kept these angels classified as sharks. Whereas skates' and rays' pectoral fins are attached to their head, the angel sharks' fins are not. This difference may be small, but it keeps these creatures in the shark family.

These flattened fins also allow them to spend a lot of time lying on the bottom of the ocean floor, waiting for a meal to swim by. But even if they're not as ferocious-looking as other sharks, don't underestimate them. Their sharp teeth and tenacious bite have earned them a nickname on the other end of the religious spectrum: sand devil.