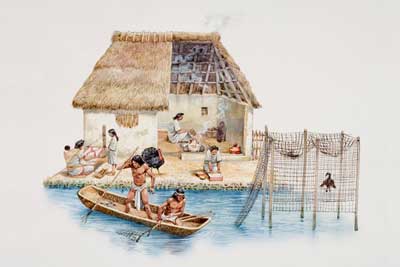 Scientists, chemists and marine biologists have scrambled for decades to find a magic potion to repel the hundreds of shark species that inhabit the world's oceans and seas. In the United States, research began in earnest during World War II because pilots and sailors constantly moved across shark-infested waters. Since then, in spite of many promising theories -- most recently using magnets and electropositive metals -- none have completely hit the mark.

Is it possible that native Indians in Mexico and Central America discovered a simple, yet effective, approach thousands of years ago? The Aztec Indians dangled strings of chili peppers from their canoes to ward off sharks in the water [source: Bavley]. The Cuna Indians in Panama still practice this custom today [source: Andrews].

Cultivated chilies made their way into Aztec cuisine and culture as many as 6,000 years ago [source: Perry and Flannery]. The Aztecs jazzed up their diets with the peppers, as well as exploited its medicinal properties to soothe sore throats. The pungent smoke and fiery juices from the plants also were used as weapons and punishments, manipulating its spice into a powerful, stinging irritant [source: Bavley].

Along with chilies, sharks played a prominent role in Aztec culture. The Pacific Ocean and Gulf of Mexico that bordered the Aztec empire are still home to many shark species. In 1978, archeologists discovered remnants of sharks' bodies beneath the ruins of the Aztec Great Temple, and those sharks most likely were sacrificed gifts to their gods [source: McDavitt]. They believed that the earth was created from an aquatic monster called the Cipactli, which has been compared to sharks, crocodiles and sawfish, and that the gods must be revived through regular sacrifice [source: McDavitt].

If the Aztecs had enough mastery over sharks to subdue and offer them as gifts to their gods, could they also have kept them at bay with strings of chili peppers? If you can stand the heat, head to the next page for the answer. 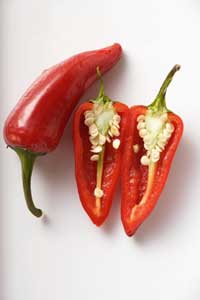 Some people have proposed using that hotter than hot capsaicin extract for use against sharks. The idea behind one Capsicum shark repellent patent is essentially a pepper spray for sharks. Delivering a shot of Capsicum juice at a shark would irritate the fish's gill membranes and nerves across its entire body [source: Matos and Romero]. Similar types of repellents have worked with terrestrial pests, such as deer and even bears. However, the patent application has yet to be approved, calling the invention into question.

Because of the sharks' sensory organs and the dilution of capsaicin in the water, it doesn't seem likely that the pepper spray would deter the fish. Their noses don't open into their respiratory systems like humans, meaning any spicy water would not enter through the nostrils [source: Parker]. They also wouldn't ingest the water because they extract oxygen from it then release it through their gills [source: Parker]. Finally, their eyes have dual eyelids and a protective membrane to keep their peepers safe.

The Discovery Channel's dynamic duo of science, Jamie and Adam of MythBusters, closed the book on this question when they tested this theory with capsaicin extracted from the fiery habanero pepper inside of a bio-degradable balloon. Even though the peppers pack a powerful punch, it wasn't enough to scare away any sharks.

But these results aren't that surprising considering the amount of noxious chemicals sharks can withstand. For example, one experiment to find a poison capable of killing a shark ended in 29 misses [source: Parker]. Strychnine was the only thing that did the job, and even that took eight minutes to work [source: Parker].

Fortunately, shark attacks are a statistically rare occurrence, and there are many things you can do to help avoid encounters and to fend them off when you come face to face.

For more information about shark defense and other shark-related topics, dive into the links on the next page.

Can playing dead help save me from a shark attack?
Piranhas: Toothy Nippers With a Bad Reputation
Cuttlefish, Masters of Camouflage, Have Newly Discovered Super Power