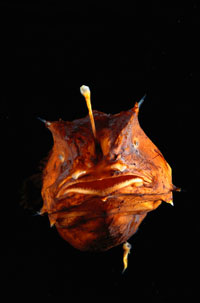 The anglerfish, with its bioluminescent protrusion for attracting prey.
Darlyne A. Murawski/National Geographic/Getty Images

Light is a very important thing. For all animals that possess the sense of sight, light helps us interpret the world visually. Depending on how light reflects off an object, it's revealed as smooth or rough, large or tiny, friend or foe. This holds true not just for us land-based animals, but for those that live under the sea as well.

Some marine life emits a healthy blue-green glow called bioluminescence. This biological phenomenon has been shown to ward off predators, attract prey and allow the glowing organism to see. Some bioluminescent algae glow when they become agitated [source: Scripps Institution of Oceanography].

In the mid-1990s, researchers discovered that two species of stomiid fish emit a red bioluminescence. Since most aquatic life have eyes attuned to sense light in the blue-green wavelength (which accounts for most of the color spectrum found underwater), other fish can't see the red light the stomiids emit. But because they have specialized pigments in their eyes, the stomiids can see light at this wavelength [source: New Scientist]. This means they can detect it reflected off nearby prey in dark water that can't see the stomiids in return. It's somewhat like playing a deadly game of hide-and-seek, and the stomiids are the only ones wearing night vision goggles.

Light also plays a role in the life of the anglerfish. The female of this exceedingly unique species has a protrusion like a fishing pole which hangs from her head to just in front of her mouth -- which is filled with rows of sharp, jagged teeth. The anglerfish uses her light to attract prey, which she catches in her powerful jaws.

But as vicious as an anglerfish may look, she's only about the size of a teacup [source: National Geographic]. Sharks, on the other hand, can do much more damage. Are they attracted to light like other fish are? Find out on the next page. 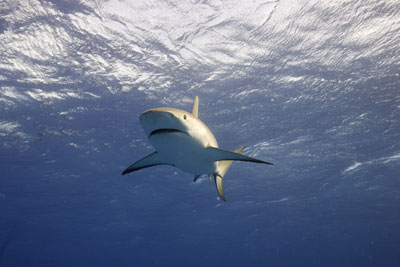 Can wearing magnets really repel sharks?
Can I Survive a Shark Attack by Gouging Out Its Eyes?
Greedo: Killed in Cantina, Lives on in Fish Form