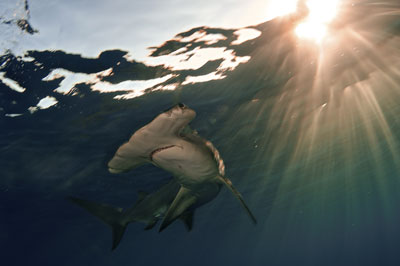 Great white sharks certainly don't suffer from a lack of self-esteem. After all, they're the No. 1 predator in the sea. Tiger and bull sharks aren't too shabby either -- they're stealth hunters that look great on television and scare the daylights out of beachcombers. White tips and threshers look pretty tough, too, even though they aren't as feared as their great white and bullish cousins. Hammerheads, on the other hand, might feel a little left out. They have little mouths with little teeth, and they aren't known to bother humans much. They don't exactly strike fear into the hearts of scuba divers or surfers. Then there's the head. The wide, flat, hammer-shaped head with bug eyes on either side -- they're just kind of funny-looking.

Despite how they may feel about themselves, hammerheads are one of the most intriguing species of shark. There are nine different classifications of hammerhead sharks, but only four are common and abundant: the great hammerhead, scalloped hammerhead, smooth hammerhead and bonnethead. Out of these four, all but the bonnethead are considered to be dangerous to humans, but you probably shouldn't worry much about them. There have only been 38 recorded hammerhead attacks on humans since 1580, only 16 of which were unprovoked, and no one has ever been killed by a hammerhead [source: ISAF]. They aren't generally aggressive toward people, so the unprovoked attacks were likely due to surprise or fear.

­You can find hammerheads in temperate and tropical waters all over the world. Some, (like the great hammerhead), stay in deeper waters, while other species hang out closer to the shore. They like cooler water and will migrate in schools toward the poles in the warm summer months. They're fished commercially and recreationally for their hides and meat, and like most sharks, their fins are commonly cut off in a process called finning and used as an ingredient in shark fin soup in Asia. Shark finning is condemned as cruel throughout much of the world and is outlawed in U.S. waters.

We'll get into the unusual physical characteristics of the hammerhead shark in this article and explore the different theories about what their odd-shaped head is used for. We'll also learn about their mating habits, how they hunt, what they eat and which ones travel in schools.

The Life of a Hammerhead Shark 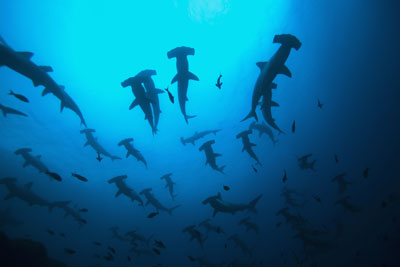 Hammerheads have quite a range in size depending on the species. Scalloped hammerheads are generally 5 to 10 feet long (1.5 to 3m) and weigh about 175 to 225 pounds (80 to 100 kg). Smooth hammerheads can grow a couple of feet longer, but the great hammerhead is by far the largest. These carnivores can grow up to 18 feet long (5 m) and weigh as much as 800 pounds (360 kg). The bonnethead is the smallest of the four major species of hammerhead, at an average of 3.5 feet long (1 m) and about 20 pounds (9 kg) [source: Florida Museum of Natural History].

Aside from the unusual shape of its head, hammerheads have another distinctive physical feature -- their tall dorsal fin, which protrudes high above the surface in shallow waters. Hammerheads are grayish-brown to olive on top and, like most sharks, are lighter colored on their bellies.

The hammerhead's mouth is smaller than most other large sharks and can't open as wide. Inside its small mouth are small teeth that are sharp and heavily serrated up front but larger and flatter in the back. These hard back teeth are used for grinding up tougher prey, like shellfish. Scalloped, smooth and great hammerheads feed on bony fish, small sharks, shellfish and their favorite dinnertime treat, stingrays. Bonnetheads eat bony fish, shrimp and even seagrass, but mainly feed on crustaceans like blue crabs.

Male scalloped hammerheads are outnumbered 6-to-1 by females, making them fairly choosey when selecting a mate. Their preference? Big girls. The larger the female, the more shark pups she can carry and the more sought after she'll become. When schooling, the largest females are typically located in the center. The male then heads to the center, picks a female from the school and swims off to mate, right there in broad daylight. An older large female can have up to 40 pups, compared to a mere 12 for a younger and smaller shark. They carry the pups inside them for about eight to 10 months before giving birth in shallow waters. The pups are about 18 inches long at birth and have soft "hammers" that are bent back toward the tail to make it easier on mom. The hammer then firms up as the shark grows larger.

In the next section, we'll learn about some of the different theories on why the hammerhead has a hammer-shaped head. 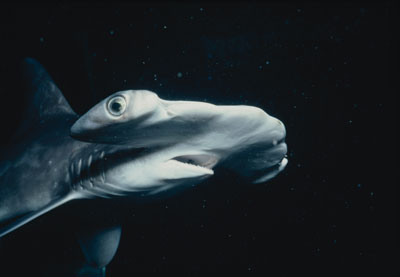