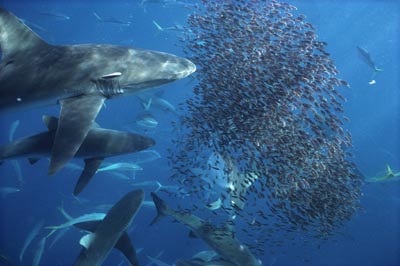 Some scientists have observed feeding frenzies occurring naturally, particularly in shallow waters where seabirds, seals and sea lions congregate. However, they don't appear to be a common natural occurrence. Rather, it's more likely that feeding frenzies are rare events caused by a "supernormal stimulus," such as a high amount of stress in the water [source: Parker].

Studies have shown that sharks can sense distressed prey; they respond to scents emitted by injured fish, and they can hear the sounds of a wounded person thrashing around in the water [source: Shark Trust]. Given the choice between healthy and injured prey, the shark will always pick the injured prey because it will take less energy to catch it. But things get crazy when more than one shark shows up to take advantage of the prey's misfortune.

It's important to note that many species retain a sense of order within a frenzy. The Caribbean reef shark, for example, still maintains a quasi pecking order during a feeding frenzy [source: Dehart]. The whitetip reef shark also behaves in a (somewhat) orderly fashion during what looks to be a chaotic bloodbath. If this buffet entices multiple sharks, sometimes they'll inadvertently bite each other [source: Dehart].

Many feeding frenzies start near fishing boats, particularly when fishermen pull in a net of fish. These fish are thrashing against the net and perhaps have been injured in their capture, and the chemicals they give off attract the sharks. Sharks become aroused by the scent of blood and think they've happened upon an easy meal, but when more than one shark shows up, the scene gets competitive.

In the case of a shipwreck, sharks may be attracted to the panicking humans who are splashing around in the water. At the time of World Wars I and II, the oceanic whitetip shark was believed to have had many a feeding frenzy when boats were torpedoed and planes were shot down. This deep-water dwelling shark was often first on the scene of maritime disasters, such as the World War II sinking of the Nova Scotia steamship. Of the 1,000 men aboard, only 192 survived, with many fatalities ascribed to whitetip feeding frenzies [source: Bester].

Humans aren't normally on the shark's menu. Shark attacks on humans might actually just be an error or an experimental bite to determine how they'd taste. But one practice that is increasingly causing feeding frenzies may lead sharks to associate humans with food even more. Shark feeding dives, an activity in which a group of caged divers descends to the deeps to get up close and personal with sharks, have become a huge draw in some parts of the world. To attract the sharks, diving companies use chum, or a mixture of blood and dead fish bits. Now, frenzies are seen most often when sharks are fed with artificial bait [source: Parker].

In 1975, the U.S. National Park Service warned people not to feed wild animals in national parks and refuges because giving supplemental food to these animals changes their feeding habits and behaviors. If sharks start to link humans with this food, they might seek out humans who have no food to give them. Several injuries have already occurred to swimmers who were in sites previously used by divers [source: Alevizon]. In addition, many feel that artificial feeding defeats the purpose of trying to see these creatures in their natural state.

Whether the attraction is to frantic prey or a frothy mix of blood and guts, the intense stress emitted by these items seems to cause the sharks to freak out and enter the frenzied state. The more sharks attracted to the scene, the more distressed the scene becomes, as the splashing increases. Scientists don't know yet how much of a feeding frenzy is actually about eating and how much of it is about establishing dominance in some ordered way that looks like chaos to us. Regardless, frenzies are one more thing that makes sharks both fearsome and fascinating.