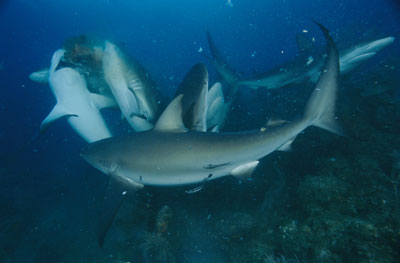 The idea of a "yummy hum" -- a low-frequency sound that lets sharks know their order's up -- is based on the fact that sharks pick up on plenty of infrasonic noises (ones too low for us to hear) and use them to their advantage. It's possible because lots of oceanic sounds operate at this level. Dying fish, for example, emit infrasounds as they flop around in the water, so needless to say it's a noise to which sharks are reportedly attracted: Once they hear the yummy hum, it's dinner time. Homing in on this yummy hum helps them to locate an injured fish -- guaranteed weak prey.

But don't get confused. Sharks don't go crazy for actual humming. They prefer rapid pulsing sounds as opposed to steady continuous hums. Specifically, studies of sharks have shown that they respond most to low-frequency pulsing sounds, including those well below the threshold of human hearing.

The first test to demonstrate this was conducted by shark researchers from the University of Miami in 1963. The researchers found that sharks didn't respond to low-frequency continuous sounds or any kind of high-frequency sounds [source: Nelson and Gruber]. Later tests determined that sharks hear frequencies ranging between approximately 10 and 800 hertz [source: Shark Trust]. (Humans, by contrast, hear frequencies between about 20 and 20,000 hertz [source: Britannica].)

Sound behaves differently underwater than it does traveling through the air. Water is denser than air, but because of its greater elasticity, sound travels farther underwater than it does on land -- and it travels about four times faster in water than through air [source: FAS]. What's more, sound waves of low frequencies below 500 hertz can travel thousands of miles through the ocean without losing much steam [source: McGraw-Hill].

So sharks have adapted to tuning in on low-frequency pulsing sounds. But how do they hear? If you've ever seen a shark, you may have noticed they don't have any visible ears. Unlike humans, who have a pair of inner, middle and outer ears, sharks have only inner ears. Each ear consists of three D-shaped, fluid-filled canals that allow the shark to orient and balance itself (like your inner ears do), and tiny hair-like structures that sense the vibrations of sound waves [source: ReefQuest].

Sound is, after all, simply a wave of energy that causes air particles to vibrate rapidly (at high frequency) or slowly (low frequency). And sharks have developed another means -- called the lateral line -- to sense low-frequency sound vibrations. Lateral lines are a series of fluid-filled tubes that crisscross the shark's body just beneath the surface of its skin [source: Shark Trust]. These tubes detect faint changes in pressure, including those made by the vibrations of sound waves.

The lateral lines and inner ears of the shark are used to locate prey, including injured fish as far away as around 800 feet (roughly 250 m) [source: Sea World]. Studies have shown that the flapping sounds injured fish make attract sharks. Sharks have been observed to respond even to audio recordings of flapping fish broadcast underwater [source: Shark Trust]. So you could say a yummy hum is more like a yummy splash. Either way, sharks' detection skills aren't too shabby, considering they have only an inner ear to work with.

For more information on sharks and other related topics, swim over to the next page.