The Cockroach Life Cycle and Behavior 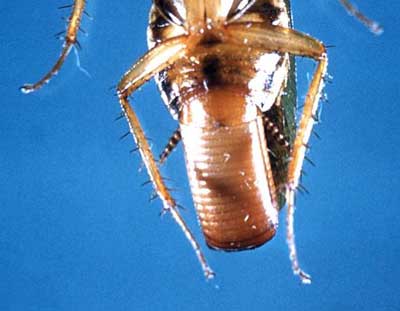 As with many animals, cockroach reproduction relies on eggs from a female and sperm from a male. Usually, the female releases pheromones to attract a male, and in some species, males fight over available females. But exactly what happens after the male deposits his sperm into the female varies from species to species.

Most roaches are oviparous -- their young grow in eggs outside of the mother's body. In these species, the mother roach carries her eggs around in a sac called an ootheca, which is attached to her abdomen. The number of eggs in each ootheca varies from species to species. Many female roaches drop or hide their ootheca shortly before the eggs are ready to hatch. Others continue to carry the hatching eggs and care for their young after they are born. But regardless of how long the mother and her eggs stay together, the ootheca has to stay moist in order for the eggs to develop.

Whether mother roaches care for their young also varies from one species to another. Some mothers hide or bury their ootheca and never see their offspring. Others care for their offspring after birth, and scientists believe that some offspring have the ability to recognize their mothers. The number of young that one roach can bear also varies considerably. A German cockroach and her young can produce 300,000 more roaches in one year. An American cockroach and her young can produce a comparatively small 800 new roaches per year.

Nymphs molt several times as they become adults. The period between each molt is known as an instar. Each instar is progressively more like an adult cockroach. In some species, this process takes only a few weeks. In others, like the oriental cockroach, it takes between one and two years. The overall life span of cockroaches differs as well -- some live only a few months while others live for more than two years.

Cockroaches generally prefer warm, humid, dark areas. In the wild, they are most common in tropical parts of the world. They are omnivores, and many species will eat virtually anything, including paper, clothing and dead bugs. A few live exclusively on wood, much like termites do.

Although cockroaches are closely related to termites, they are not as social as termites are. Termite colonies have an organized social structure in which different members have different roles. Cockroaches do not have these types of roles, but they do tend to prefer living in groups. A study at the Free University of Brussels in Belgium revealed that groups of cockroaches make collective decisions about where to live. When one space was large enough for all of the cockroaches in the study, the cockroaches all stayed there. But when the large space was not available, the roaches divided themselves into equal groups to fit in the smallest number of other enclosures.

Another study suggests that cockroaches have a collective intelligence made up of the decisions of individual roaches. European scientists developed a robot called InsBot that was capable of mimicking cockroach behavior. The researchers applied cockroach pheromones to the robot so real roaches would accept it. By taking advantage of roaches' tendencies to follow each other, InsBot was able to influence the behavior of entire groups, including convincing roaches to leave the shade and move into lighted areas. Scientists theorize that similar robots could be used to herd animals or to control cockroach populations.

In addition to robotic intervention, there are several steps that people can take to reduce or eliminate cockroach populations. We'll look at these next.