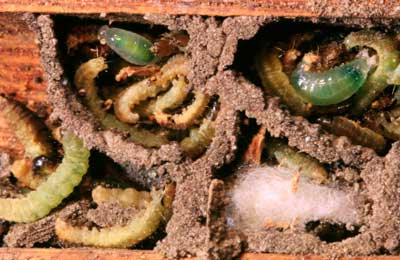 Modern parasitic wasps continue the practice of laying their eggs on or inside host insects they find, but most species long ago moved on to building nests. This method ensures the hatching young have the shelter of a protective structure, as well as adult wasps to guard them. A queen builds a cylinder, fills it with one or more paralyzed insects, then deposits an egg. When the egg hatches, the hungry larva feasts on the hapless victims.

The number of captured insects provided for wasp larvae varies from species to species. The black and yellow mud dauber (caementarium) will fill a larva's cylinder with about 40 spiders. Pepsis wasps (also known as tarantula hawks), on the other hand, will lay each egg inside a single paralyzed tarantula. The emerging larva will then proceed to eat the imprisoned spider from the inside out.

But don't cry over these entombed creatures. Wasps perform a beneficial service to humans by preying on potential pests, including the venomous black widow spider. Some farmers even ship in wasps to prey on grubs, caterpillars and boll weevils that would otherwise detroy crops.

There is also a great deal of variety to be found in the diet of each species' larvae. Adults subsist on pollen and nectar and almost always hunt only to feed larvae. With many species, individual wasps receive most of the nutrition they'll ever get in life as larvae.

While the exact architecture of wasp nests ranges from small underground structures to giant paper constructions, the size of nests can be easily divided between two kinds of wasp: social and solitary.

Solitary wasp queens build small, isolated nests, which they fill with eggs and food for the growing larvae. Social wasps, which account for only about 1,000 species of the vespidae family, follow a caste system consisting of one or more queens, male drones for mating purposes and a host of sterile, female workers to build the nest, hunt for food and tend to the growing larvae. Social wasps will attack furiously in defense of their nest when disturbed, communicating the threat to each other through the use of chemical signals called pheromones.

But a wasp nest is not a city. It's an undertaking with a single purpose: to ensure the production of young so the genetic line can continue into the next season. For this reason, the production of future queens takes priority over all else. This often means that, at the end of the nest's cycle, every member of the nest, except emerging queens, dies. In wintering areas, only queens will hibernate through the colder months to emerge again in the spring and start the cycle all over with a new nest.

Wingless wasps? Picnic-loving wasps? In the next section, we'll take a look at some noteworthy species -- including the wasp you can thank every time you tear into a package of Fig Newtons.