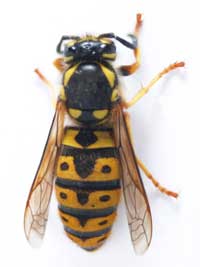 Is this yellow jacket a part of your yard or an enemy invader? You decide.
©iStockphoto/Kalvis Kalsers

Sure, wasps pollinate the plants responsible for beautifying your lawn, growing your food and producing your oxygen, but just who do they think they are buzzing around at your backyard pool party?

The first step in any attempt to manage a wasp problem is to realize there might not be a problem. Beneficial qualities aside, it's important to remember that even the more aggressive species will not attack you unless they feel you're threatening them or their nest. If they're just flying around, the wasps are probably looking for pollen or insects to feed their larvae; since you're neither of those things, you don't have to worry much. If one lands on you to check out a particular scent or color, don't panic. If you can avoid swatting it or making any swift movements, the wasp will quickly fly off and find something better to occupy its time.

If there seem to be too many wasps around, consider exerting your control over some of the factors that encourage them.

Likewise, if wasps have built a nest nearby, consider simply leaving them alone there. They will protect their turf if threatened, but they built the nest to raise their young -- it's not a launching pad for a wasp war on all humans.

Sometimes, wasps will build nests in inconvenient places, or their numbers will be too great for cohabitation to remain a viable option. If wasps need to go, consider the scope of any attempt to exterminate or remove them. If the nest is large and occupied by social wasps, such as yellow jackets or hornets, consider hiring professional pest controllers. Even with smaller nests, be sure to wear padding and eye protection -- not just against stingers but also against any store-bought insecticides you might be spraying into the air. And remember, if you kill a wasp near the nest, the wasp's death will release chemical signals which will signal the other wasps to attack.

While a can of insecticide and a broomstick may seem like the perfect weapons against a nest, consider some of the more preventative measures available. Various traps are readily available and can cut down on the number of wasps buzzing through your yard, especially if placed early in the season so as to catch emerging queens. Wasps are drawn into the traps via bait and then can't escape.

The key, of course, is to pick your battles. Know when wasps are truly pests and when they are valuable members to your backyard ecosystem. And, if you decide they must go, know when you're outgunned. To learn more about wasps, visit the links below.