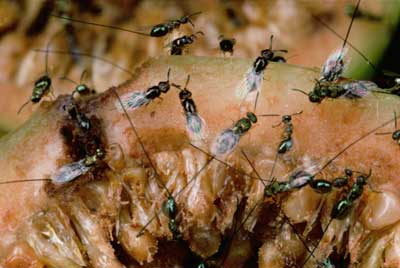 With so many species of wasps at large in the world, it's difficult to completely catalog their vast anatomical and social variety within a single article. So, we've chosen a few fascinating species for closer examination.

Why worry about delivering food to your larvae back at the nest when you can just build the whole nest inside your food source? Fig wasps accomplish just that. There are 900 species of fig wasp, and each is responsible for pollinating one or two species of fig plant. In this situation, both plant and insect have come to depend on each other in what is called mutualism.

A fertile female fig wasp will seek out the flowering parts of a fig plant, located inside of a fruit-like structure called the syconium. There, she lays her eggs and introduces pollen to fertilize the plant. The larvae feed off plant tissue and eventually hatch into new fig wasps.

But does this mean every time we chomp into a Fig Newton we're loading up on wasp carbs? No, because the fig plants that humans harvest produce two kinds of figs: edible figs and caprifigs. Females can only lay eggs inside caprifigs, so these quickly fill up with wasp eggs while edible figs only fill up with seeds. Learn more about fig wasps by reading Are figs really full of baby wasps?

The bane of many picnic-goers, this social wasp's apparent fondness for sandwiches, barbecue and fried chicken often leaves the impression that they are primarily scavenging carnivores. But like most wasps, the only items they're really interested in are sugary teas and sodas. The meat isn't for them, it's for the larvae.

When they're not bothering picnickers, yellow jackets are busy hunting down a host of insects that frequently prey on cultivated plants. Yellow jackets pack a painful sting and will fight vigorously to defend their underground nest if disturbed. And since the average yellow jacket colony boasts a population between 2,800 and 5,000 wasps, it's best to step lightly when you spot their telltale yellow and black.

These wasps figured out long ago that one of the best sources of food for their larvae was other wasp larvae. And what better way to feed them than by leaving the larvae in another wasp's nest to begin with. This brilliantly-colored deadbeat mom will lay her eggs inside the nests of solitary bees and wasps. When the cuckoo larvae hatch, they feed on the larvae and food left by the actual nest builders.

Despite their appearance, velvet ants are actually solitary wasps. While the males come fully equipped with wings, the females ditched the wings long ago to better pillage underground bee and wasp nests, where they lay their eggs to feed on the native larvae. Velvet ants pack a fearsome sting, and some are even capable of squeaking at perceived threats.

Despite the essential role they play in the ecosystem, your chief interest in wasps may be ridding yourself of them. Whether you love or hate wasps, learn how to manage them near your home on the next page.