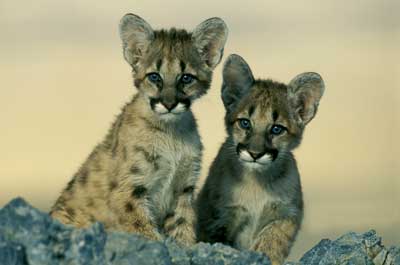 When a female mountain lion screams, it signals nearby males that it's time to mate and make some babies.
Kevin Schafer/Getty Images

The cougar is the largest native cat in North America. Outside of zoos, you won't find any big cat species, such as lions, tigers, jaguars and leopards, roaming the countryside. Surprisingly, cougars are technically small cats, members of the same group as domesticated cats. Their size is comparable to leopards, with adult males weighing around 140 pounds (63.5 kilograms) and measuring 8 feet (2.4 meters) long from tail to nose [source: Federal Wildlife Service].

While these dimensions sound awfully large to be lumped into the same category as your pet kitty, biologists didn't flub the cougar classification. Cougars received the designation because of internal anatomy rather than external. Underneath a small cat's tongue is a bone called the solid hyoid. The solid hyoid attaches to the windpipe and larynx and helps produce the animal's vocalizations. Instead of solid hyoids, large cats have flexible cartilage that can vibrate in that oral space, allowing lions and other big cats to roar [source: Busch]. Small cats can meow, hiss and growl all day, but that solid hyoid prevents them from roaring like the MGM lion.

As small cats with solid hyoids, cougars can't produce a deep roar, but females can out-scream a 2-year-old child who just discovered a heart-pounding fear of clowns at the circus. The cougar scream is a rare, high-pitched noise that rips through the wilderness air and causes hikers to freeze in place. Are those screams warning signs for us to get out of their territory? Like the wolf's howl, these cougar noises serve as forms of long-distance communication. Only females are known to make the screeching call, coinciding with their bodies' preparation for mating [source: Spalding] In human jargon, we'd call that scream a booty call.

For all those ladies out there who hate waiting by the phone for their hunk to call, look to the female cougars for inspiration. The dynamics of cougar mating is more progressive than you might expect from a deer-devouring feline. Female cougars reach sexual maturity at around 2 or 3 years old, giving birth to a litter every other year or so. Since male cougars roam their territories alone, females scream when they are in heat in order to let the males know where they are and that it's time to make some cougar babies.

Although female cougars may have to compete for a mate if their individual territories intersect, they still hold the power for when copulation occurs [source: Busch]. Until she's ready, the males must wait. But once the deed is done, the male cougars return to their solitary habits. The female will establish a den and stay with her offspring for around 15 months before the cubs set off on their own [source: Dewey and Shivaraju].

So if you happen to hear the chilling scream of a cougar in the distance, just think of it as mountain lion mood music -- and head in the opposite direction to avoid being attacked by a randy panther.