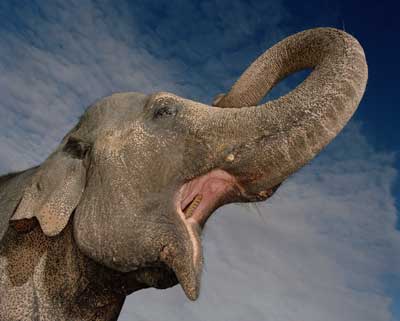 There's more going on up there than meets the eye.
Matthias Clamer/Getty Images

Scientists haven't been able to measure elephants' intelligence precisely. Nevertheless, for decades, experts have observed the pachyderms' behavior and concluded that they rank among the smartest in the animal kingdom. That said, the theory of elephants never forgetting is an exaggeration, but doesn't stray terribly far from the truth.

Elephants have the largest brains by mass of all mammals, weighing in at a hefty 10.5 pounds (4.7 kilograms) for an adult [source: Shoshani et al]. While we can't judge how effectively a brain works based solely on its size, it can offer a decent approximation and give us a hint as to the power of elephant memory. One conventional way of estimating an animal's intelligence is examining the encephalization quotient (EQ). The EQ compares the actual size of an animal's brain against the size scientists would project its brain to be based on body weight. To better understand this measurement, think of an apple and an avocado. Both fruits are relatively the same size, but an apple has tiny seeds, while an avocado's seed resembles a golf ball.

The logic follows that the smaller the ratio of brain to body mass (think of the apple example), the dumber the animal and vice versa. For instance, people have an average EQ above seven, while pigs have an EQ of around .27 [source: Shoshani et al].

Elephants score relatively high on this scale, coming in at a cross-species average of 1.88 [source: Shoshani et al]. For comparison, chimpanzees have an EQ of 2.5. Female elephants, the leaders of the herds, often have greater EQs than males. This is probably linked to the matriarchal social structure of elephant herds. Studies have also found that the elder female elephants exhibit signs of a superior memory, alerting the herd if a familiar danger arises or an old feeding site is recognized [source: Briggs].

The olfactory, or smell-related, region of an elephant's brain is extremely developed in relation to its other senses. Elephants can distinguish between the urine scents of up to 30 female relatives, even if they've been separated for years [source: Briggs]. This trait helps elephants stay together when traveling in large herds, with the urine serving as a bread crumb trail for the nose -- or trunk in this case.

While elephants' utilitarian memories help them retain essential survival information, they also allow these animals to recognize the past. Elephants' show signs of grief over dead relatives such as gently touching the corpses with their feet and caressing the bodies with their trunks [source: Shoshani et al]. In an experiment that involved showing different sets of objects to a family unit of elephants, the group responded most prominently to bones and tusks once belonging to a relative [source: University of Sussex].

An elephant's memory doesn't stow each detail of every stimulus ever encountered. Instead, the brain encodes what's necessary for survival, such as food location and family identification, in the same way that our short-term memory systems selectively discard or transfer data to our long-term storage [source: Trivedi]. And just like those moments that impact our lives the most, the contents of elephants' functional memories are preserved for future retrieval.

For more information about elephants, go to the links below.

Here are a few interesting nuggets about the world's largest mammal: