The Bamboo Root of the Problem: Giant Panda Eating Patterns 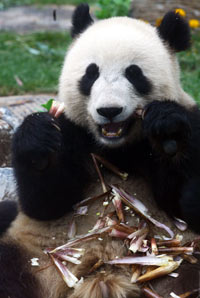 Giant pandas, in some ways, are anomalies of evolution. Their ancestry, as far as experts can conclude, shows that they descended from meat-loving carnivores. Indeed, even a modern-day giant panda's biological construction dictates that it is a carnivore. In other words, its digestive tract is built to break down meat and is inadequate for breaking down bamboo stalks efficiently.

This fact is startling since the first thing people usually associate with pandas is bamboo. Indeed, as much as 99 percent of their diet is bamboo. But if they have carnivorous digestive systems, will you ever come across a panda in the wild feasting on prey? The answer simply is no.

This is not to say that pandas are conscientious objectors to the practice of eating meat. Just as you won't find pandas in the wild feasting on flesh, you won't find them carrying signs and protesting a tiger's deer feast.

Giant pandas will occasionally eat meat when offered it, but they are unskilled predators. Perhaps evolution favored pandas that relied on bamboo because the grass is available year-round. For whatever reason, after thousands of years eating it, they've grown a liking for bamboo, so much so that they prefer it to pre-killed meat and other foods.

This preference is unfortunate for many reasons. Because pandas have short digestive tracts and lack special bacteria and protozoans that herbivores use to break down cellulose, pandas garner a dismal amount of nutrition from bamboo. Carnivores typically extract 60 to 90 percent of the energy from a meal, while giant pandas get about 20 percent from bamboo (on a good day) [source: Schaller].

To accumulate enough energy to get through the day, giant pandas eat an enormous amount of bamboo -- about 40 pounds (18 kilograms) per day [source: Youth]. Not that the panda's day is incredibly strenuous, as most of it (12 to 16 hours) is spent eating. Add that to 8 to 12 hours of sleep to conserve energy, and you've got an animal that eats to have enough energy to eat.

One might think hibernation would be a great way for the giant panda to conserve energy. But its bamboo diet is exactly what prevents it from accomplishing an extended sleep period. Giant pandas can't pile on enough body fat for foodless months; bamboo doesn't provide enough energy to allow the panda to sustain a long period without eating.

But, does this make the giant panda an exception among bears? Next, we'll learn why "panda bear" might be a misnomer.

Mixed Up in the Family Business

What's black and white or red all over? Although the "panda" usually conjures up an image of the black and white giant panda, there is another kind called the red panda. As the "Fredo Corleone" of the panda family, the red panda is often forgotten and much more weasel-like. It's smaller and belongs to the same family as raccoons. Like its bigger counterpart, the red panda doesn't hibernate and primarily eats (and can't efficiently digest) bamboo.