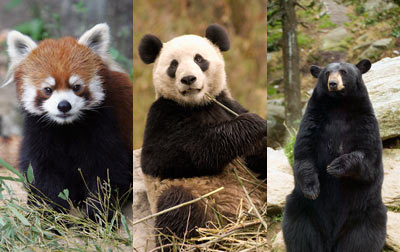 Humans love naming things and fitting them in groups, and categories certainly help us study animals. But animal classification is a surprisingly inexact science. The problems arise when animals don't quite fit in this or that premade category. Giant pandas are just such an example.

It wasn't until 1869 that Westerners got their first look at the giant panda. Père Armand David, a Catholic priest, had the first peek and likened the strange animal to a bear and so used the Latin word for bear, ursus, in its name. This instinct is understandable -- after all, the giant panda looks a lot like a bear. But not too long after Armand David did this, Alphonse Milne-Edwards, a French scientist, inspected the remains of a giant panda and concluded it was closer to a cat-like creature in the raccoon family called the red panda. He promptly changed its name and put it into its own category.

But that wasn't the end of the story. In fact, this tug-of-war over whether the giant panda is closer to a bear or to a red panda has been going on for several decades. Is it a little bear or a big raccoon? Red pandas weigh in at about seven to 14 pounds, and the largest raccoon ever recorded was a little more than 60 pounds [sources: Smithsonian, nature.ca]. Compare this with the fact that giant pandas often grow to more than 200 pounds, and it's no wonder some question how closely related they really are to each other [Youth]. Here's a rundown of some of the characteristics that each side has going for it:

Similarities to a red panda: Both giant and red pandas eat bamboo, grip bamboo the same way and share similar snout, teeth and paw features, as well as a distinct resemblance [source: Schaller].

Similarities to a bear: Obviously, the giant panda strikes many as a bear because it has a very similar shape and size. But the giant panda also shares the characteristic shaggy fur and walks and climbs like a bear [source: Maher].

It might be possible that the giant panda and red panda developed similar bamboo-related features (such as grip) separately as a result of a coincidentally shared diet, a process known as convergent evolution. On the other hand, perhaps a similar process of convergent evolution explains their resemblance to bears.

Some have even argued that we need to revisit the classification of the red panda to see if it is accurately grouped with raccoons. Since the development of DNA technology, scientists have pursued these avenues to answer these questions. Some DNA studies have shown that the giant panda is closer to the bear family while the red panda is indeed closer to the raccoon family. Nevertheless, these results are inconclusive, and the argument remains unresolved.

Or, we could take a cue from George B. Schaller, author of "The Last Panda," who prefers that the giant panda retain its mystery and individuality, saying, "the panda is a panda" [source: Schaller].

In a way, bears don't truly hibernate, but rather experience a less absorbing phase called torpor, during which they don't eat, drink, or move much. Raccoons go through a similar kind of torpor, as they may sometimes come out on warm days to eat and drink. So, whether a panda is a bear or a raccoon, the fact that it doesn't hibernate makes it an exception to either group.