Could a Platypus Poison Me? 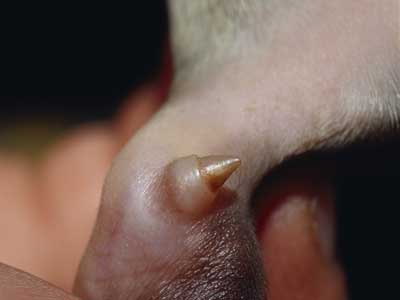 Venom from platypus spurs probably won't kill you, but it could make you cry.
Jason Edwards/Getty Images

As if egg-laying, nippleless nursing and electroreception in a mammalian species weren't enough for you to wrap your mind around, the platypus has one more curve ball to toss your way. The male platypus has a spur on either hind foot that excretes venom. Though females are also born with the spurs, they fall off before adulthood. Aside from two other mammals -- certain species of shrew and solenodons -- harboring venom is a trait usually reserved for reptiles and amphibians. Put all of these traits together and what do you have? An animal that straddles three classes: mammal, bird and reptile.

But why would the male platypus need venom? The relatively docile animal has few predators, which include carpet snakes, eels and foxes, and doesn't need the toxin for hunting [source: Hamilton]. The only probable explanation that researchers have come up with is that males may use it offensively during mate competition. In fact, the male platypus produces venom mostly during the spring, which just happens to be when platypus couples breed [source: National Institutes of Health]. Apparently, the venom isn't meant to kill other males, only to provide for a rousing fight.

That isn't to say that platypus spurs feel like a meager pin prick. Even though the platypus only weighs around 5 pounds (2.2 kilograms), if you're engaged in a wrestling match with a male, getting stabbed with a venom-filled spur isn't a pleasant experience. Although dogs have died from platypus poison, there have been no recorded human fatalities. Platypus venom probably won't kill you, but it will cause swelling at the wound site and extreme pain that could last for weeks [source: Day]. Platypus venom shares some molecules also found in reptile venom, but researchers determined that the platypus' poison capacity evolved separately [source: Whittington et al].

This platypus offensive adaptation could end up helping humans. Since the platypus is one of three mammals that can produce venom, researchers want to determine the specific pain response pathway it stimulates in humans. They could then utilize that information to develop new pain relief medications and antibiotics, because today's available treatments don't affect pain induced by platypus venom [source: ScienceAlert].

Due to the platypus' many anomalies, more than 100 scientists recently collaborated for the Platypus Genome Project, which they completed in spring 2008. Like the Human Genome Project, this undertaking sought to map the entire platypus genome to understand how an animal with such a hodgepodge of traits could have evolved. They determined that platypuses split from our last common ancestor about 166 million years ago and share about 80 percent of the same genetic coding as other mammals [source: Bryner]. Yet, they don't have the X and Y chromosomes that determine the sexes of offspring like in other mammals. Instead, platypus sex chromosomes more closely resemble those of primitive birds, which could provide insight into the genetic footprinting that led to our own coding [source: ScienceAlert].

Now that scientists know more about how the Australian animal evolved, it's raised more questions as to why it is the way it is and how it relates to mammals, birds and reptiles. In just over 200 years, the platypus has ascended from taxidermy "hoax" to poisonous guide into the animal kingdom's genetic puzzle.