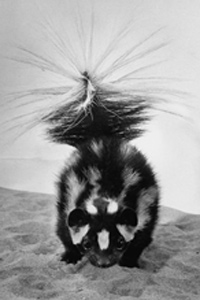 This guy's not showing off his gymnastic ability -- he's about to show you his other talent. See more pictures of mammals.
Loomis Deen/Time & Life Pictures/ Getty Images

When people get scared, they tend to freeze in place, scream or run away -- none of which are particularly helpful for preventing a repeat attack. Skunks are a bit more productive: They simply turn around, lift their tails and unleash a wicked scent bomb on a potential threat. Perhaps we could learn a thing or two from this weasel-like creature, because apparently this offensive skunk smell works wonders.

Animals in general have acquired an arsenal of ways to protect themselves. Porcupines have prickly quills, poison dart frogs emit a deadly toxin and turtles wear a built-in shell of armor. However, out of the vast collection of defensive tactics, it's the skunk that really has it nailed. Just one brief encounter with this black-and-white furball can have you begging for mercy … and bathing for days.

The two walnut-size glands near the animal's rectum are responsible for producing the smelly concoction, which can hold enough juice for five to six sprays. Skunks are capable of emitting the off-putting substance with amazing accuracy in a fanlike pattern, for a distance of up to 10 to 15 feet (3 to 4.6 meters) [source: Project Wildlife].

Even the bravest of animals avoid skunks at all costs. Their predators are limited to birds, like the great horned owl, which spend the majority of their time in the air, ignorant of the animal's nauseating odor.

Skunks have much more to offer than just their perfume de nausea. These omnivores feast on a variety of plant and animal life, including eggs, acorns, fruit and small rodents. Their appetite for small mammals helps to keep the rodent population from getting out of hand. Skunks also use their strong front feet and long nails to dig for insects, which account for up to 70 percent of their diet [source: Wilke]. Their status as opportunistic scavengers also helps to keep roadways clean.

And as people encroach further into skunk territory, it's not uncommon to spot them socializing with the neighborhood cats. They make their homes in abandoned burrows or hollow logs, or in urban areas beneath buildings, woodpiles, basements and crawl spaces.

If a skunk is hanging out in your basement, you probably will have nothing to worry about as far as odors go. While you don't want to get too close since they can be carriers of the rabies virus, you needn't fear that they will just go around dropping stink bombs willy-nilly. Skunks rarely attack unless provoked and tend to give ample warning before their tails rise. But if you do happen to spot one doing its prespray dance, it's helpful to know how to smell like a normal person again.