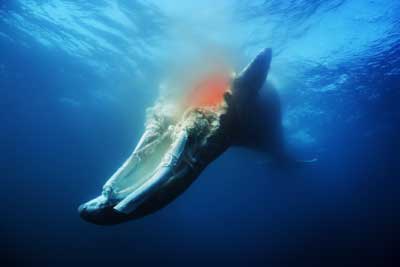 When a whale dies in the ocean, its carcass can become home to entirely new ecosystems.
Doug Allen/Getty Images

When whales die in the ocean, their bodies eventually sink to the bottom. Once the body comes to rest, biologists refer to this as a whale fall. As you would guess, other fish and sea animals initially eat the meat off the carcass. However, what came as a surprise to ocean researchers was the finding that dead whales support entire ecosystems.

In 1998, researchers at the University of Hawaii discovered that at least 12,490 individual organisms representing more than 43 species were living off of a whale fall in the deep North Pacific Ocean [source: Bennett et al]. But some of these sea creatures, which included rare species of clams, worms and eyeless shrimp, weren't nibbling away at the remains. Instead, the colonies were chemoautotrophic, which means they produce their own food via chemicals [source: Russo]. Chemoautotrophy is similar to photosynthesis in plants, except it doesn't require sunlight since the sun's rays don't penetrate the depths of the water.

Further investigation into these novel ecosystems found that bacteria that overtake a whale skeleton feed off the bones, which consists of 60 percent fat [source: Russo]. The bacteria then produce hydrogen sulfide, a chemical with the signature rotten-egg scent. Those thousands of chemoautotrophic sea creatures convert the hydrogen sulfide into usable energy to thrive and reproduce.

Researchers have located similar chemoautotrophic colonies -- without whale carcasses involved -- near cold seeps and hydrothermal vents on the ocean floor. Seeps and vents are essentially underwater vacuums and geysers where breaks occur in the Earth's tectonic plates. The seeps and vents release hydrogen sulfide, like what the bacteria release on the whale carcasses. Thanks to that chemical, you'll find chemoautotrophic organisms, such as related mussel species, in these areas similar to those found living at whale falls [source: Smith and Baco].

Illustrating the unique environment created from whale falls, two new species of worms were identified on a whale carcass. Osedax frankpressi and Osedax rubiplumus live off whale bone and resemble pink glow sticks with streamers. At first, researchers thought that they could only see the females of these newfound species. But they soon realized that the females harbor the males inside of their rudimentary bodies, allowing them to reproduce exponentially [source: Monterey Bay Aquarium Research Institute]. The worms attach to the whale fall during the enrichment opportunist stage. By having large numbers of offspring, these worms can propagate throughout the ocean encountering other whale falls and restarting the process [source: Monterey Bay Aquarium Research Institute]. These are only two of at least 16 new species that oceanographers have identified at whale falls [source: Russo].

Without whale carcasses, these fascinating creatures wouldn't exist in the frigid ocean depths. And that certainly beats disposing of whales with dynamite.

How Many Whales Are Killed Each Year?

The International Whaling Commission (IWC) issued a moratorium on commercial whaling in 1986. But the IWC's Regulation of Whaling makes exceptions for countries that catch whales for scientific research. Japan's controversial Institute for Cetacean Research (ICR) operates under these IWC guidelines and catches whales each year.

According to the journal Nature, the ICR caught at least 8,300 whales from 1987 to 2005 [source: Gales et al]. That works out to roughly 460 per year. Iceland and Norway also engage in whale hunting. In 2008, the BBC reported that Iceland planned to request a quota of between 100 and 150 whales for the upcoming season [source: Black]. Norway planned to hook 855 minke whales in 2009 but suspended hunting midway through the season because of satisfied demand [source: Moskwa]. Those three countries account for around 1,415 whales killed each year, which exceeds the World Wildlife Fund's estimate of 1,200 [source: Word Wildlife Fund].