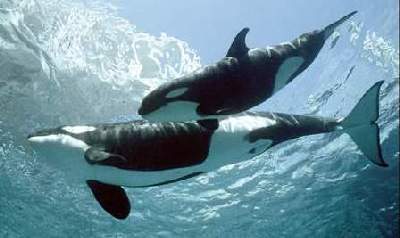 Orca whales are among the most successful ocean predators, hunting in groups and feeding on everything from small fish to other whales. They are also one of the most intelligent and playful whale species, and seem to be quite fond of humans.
Photo courtesy Sea World Orlando

All 75 species of whale are carnivores, but their hunting methods vary considerably. Toothed whales, such as the sperm whale and the killer whale (or orca), hunt in the same basic way as sharks. They have a row of strong teeth, and they tear into their prey or swallow it whole. Many toothed whales eat only small fish and other easy-to-catch prey. Orcas, on the other hand, may attack sea lions, seals and even other whales. Like wolves, polar bears and other land predators, they track and stalk their prey, picking out a weaker target (such as a baby humpback whale). Orcas and other species usually hunt in packs, sometimes surrounding their prey. Despite these tendencies, orcas and most other toothed-whale species pose little threat to humans. In fact, many species seem to enjoy human company.

Some of these hunters have developed echolocation abilities to help them find their prey and locate any obstacles. Echolocation is a very simple concept: The whale emits a series of clicks (or other sounds) from its mouth or from organs in its head, and the sound waves travel out in the surrounding water. When the sound waves reach an obstacle or another animal, they bounce off of it and travel back to the whale. Water conducts sound very well, and whales have excellent hearing, so they may pick up even the faintest echoes from an object miles away.

In a volume of water with consistent pressure, sound will always travel at the same speed. By processing how long it takes the echo to return, the whale can calculate how far the sound wave traveled, and therefore determine how far away the object is. Like most animals, whales have two ears, one on each side of their head. This lets them determine the direction a sound is coming from. If the sound reaches the right ear first and is slightly louder in the right ear, the sound source is to the right; if it reaches the left ear first, it is to the left. In the dark world of the ocean, whales must sense their environment primarily through sound. In whales, a greater percentage of the brain is dedicated to processing aural information than to processing visual information. (In humans, the reverse is true.)

Thanks to their size, whales don't have to worry about sensing many dangerous predators -- other than man. Unfortunately, manmade noise is destroying whales' ability to make sense of their environment. Whales send out sounds and use the information that bounces back to "see" the ocean. They can determine where to find everything from nearby prey to navigational obstacles in murky waters, and they can communicate this information to other whales. However, sonar emitted by the U.S. Navy drowns out whale communication and may even be responsible for stranded whales.